It's an anecdotal and not a scientifically verifiable conclusion but here it is: Americans are sick of this presidential race and especially its many detours into various aspects of religion. 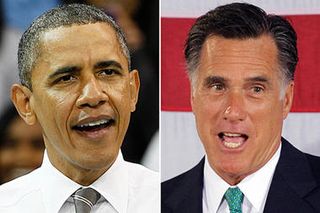 The good news is that President Obama and Mitt Romney -- and their respective campaigns -- may be moving toward a truce on using religion against each other.

At least that's a conclusion of the CNN Belief Blog, and I hope it's accurate.

The movement toward backing away from focusing on religion came after a Republican Super PAC proposed highlighting Obama's former pastor, the Rev. Jeremiah A. Wright, Jr., who was a controversial figure in the 2008 race.

Romney objected -- as he should have -- and the PAC backed away from the idea.

Similarly, the Obama team apparently now is unwilling to raise questions about Romney's Mormonism. Indeed, everyone needs to be reminded that there is no religious test allowed for holders of public office in the U.S.

And the only real concern voters should have about a candidate's religion is how it might affect public policy and the candidates actions once in office.

All of this was not evident in the GOP presidential primary race, when it seemed as if every candidate was seeking to use religion in some way to appeal to voters.

But now that the nominees are all but set, let's hope they can avoid being divisive about faith. In fact, they should work to be peacemakers in a country that is increasingly pluralistic when it comes to religion and that needs to figure out how its citizens can live in religious harmony despite their differences.

Why is that so hard?

A researcher who at first concluded years ago that therapy could turn gay people straight has now rejected that conclusion. But a Mormon group says it will continue relying on that study as the basis for its work to change homosexuals into heterosexuals. The most credible evidence suggests that such "reparative therapy" is harmful to people. I view such therapy as similar to trying to make black people think they're white or short people think they're tall.

P.S.: This Memorial Day, Shinnyo-en, the Japanese Buddhist denomination, will host the 14th annual Lantern Floating Hawaii on Ala Moana Beach in Honolulu, in partnership with the Na Lei Aloha Foundation. You'll be able to see it on a live webcast at www.lanternfloatinghawaii.com. Organizers say that this traditional Japanese lantern floating ceremony honors those lost to war, health and natural disasters and serves as a symbolic prayer for a harmonious and peaceful future for all. The ceremony starts at 6 p.m. Hawaii time, which I believe is 11 p.m. CDT. But if you're in a different time zone, you can do a time conversion from Hawaii time to yours here.