People smarter than I am have said many times that Pope John Paul II was the best pontiff the Jews have ever had. 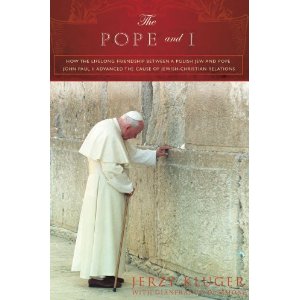 What they mean, of course, is not that Jews somehow are under any pope's rule but that this particular pope, over his long time in office, did more to improve Jewish-Christian relations than any pope in history.

And I agree, even if I think more could have been done by him and the Vatican to encourage more constructive contact between Christians and Jews at the local level.

One reason JPII improved relations between Judaism and Catholicism -- which historically, until 1965, had taught in various ways that Jews were Christ killers and pestilent (see my essay on this subject under the "Check this out" headline on the right side of this page) -- was that he grew up in Poland with Jewish friends.

Indeed, perhaps his best friend, Jerzey (known as Jurek) Kluger, has written a book about their life-long friendship, The Pope and I. Its publication now come several months after Kluger's death on Dec. 31, 2011.

I like this book a lot, although Kluger was not a professional writer. Rather, he was an engineer, and at times writes like one.

But there is much insight here. And Kluger has not written a book so full of admiration for his friend that he lets the pope off the hook on some matters that did not please the wider Jewish world.

JPII canonized a Catholic friar who, while a prisoner at Auschwitz, offered to die in the place of another, younger man -- and did. It's an inspiring story, for sure. But to tell the full story of Maximilian Maria Kolbe requires acknowledgement that he was connected with a magazine that produced a lot of antisemitic trash in the 1930s, as Hitler was forming plans for his attempt to conquer Europe and, ultimately, destroy European Jewry.

Kluger notes that at the ceremony beatifying Kolbe, the pope "delivered the homily, speaking of the friar's life and also of his work, although making no refence to Kolbe's anti-Semitic writings." (The Wikipedia piece about Kolbe to which I've linked you above says some people have sought to rebut the charges of antisemitism against him.)

Later, Kluger writes about the release in 1998 of a long-expected Vatican document on the Holocaust, "We Remember: A Reflection on the Shoah."

As I indicated, this document was produced as a result of a request by JPII but it took many years to get done, and, in the end, the pope wrote only the preface to it, as Kluger reports it. The document was roundly -- and rightly -- criticized by Jews because although it criticized individual Catholics for certain anti-Jewish acts and beliefs, it let the collective church off the hook.

And after describing some of the reaction to the document, Kluger writes, ". . .it was easy to understand why so many Jews were disappointed by the comments of a document that they had anticipated for so long."

Kluger's ability to criticize his good friend is a wonderful lesson in interfaith dialogue, for unless participants are free to hold each other accountable and disagree without walking away, nothing good happens.

This book serves as an important addition to the picture we have of one of the most important popes of all time. Kluger has done all of us a favor by writing it. It's just too bad he was not still around to see its publication.

YOU'RE WHO? BOB HITLER?

Sticking with a Jewish theme today, I offer you this intriguing BBC News piece about descendants of top Nazis who have had to learn to live with the reality of what members of their family did in the Holocaust. It raises fascinating questions about appropriate and inappropriate guilt.