When my church helped to create Hope Care Center, a 24-hour skilled nursing facility for patients with HIV/AIDS, 16 years ago, I knew that we would be helping people in ways we could not possibly foresee. 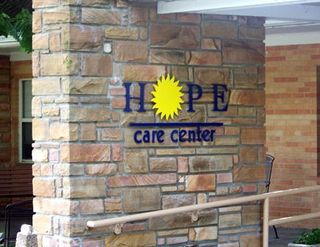 Boy, was I right.

Time and again I've seen how the center has been a loving, caring place for people who were suffering the ravages of this terrible disease, including some people I've known personally.

But the other day a fellow church member who once served on Hope Care's board sent out a note about the role Hope Care played in yet another person's life. And it touched me so much I want to share it with you, though I've changed all the names and any other identifying marks:

(Sophia), our 26-year-old administrative assistant,and her boyfriend, Tim, befriended a man named Jack. He is older and down on his luck as the former custodian of (an area school). Five years ago Tim (at the age of 21) agreed to be Jack's power of attorney since Jack had no engaged family.
Then Jack disappeared for three years until this week when a hospital in (a nearby city) called Tim. Jack was in their hospital and dying of liver failure, but he would be released Tuesday. He was also HIV-positive with complications.
So, I end up with two wide-eyed twenty something's in my office Monday afternoon. They learned first-hand that no nursing home or facility in the entire state would accept Jack. So what should they do?
You know the rest of the story. I picked up the phone right there in front of them, called the Hope Care Center and Jack was immediately transported to HCC from the hospital. I drove Tim to HCC to show him the place and they stood there waiting for us with Jack's impeccably clean room ready, fresh flowers by the bed that Trapp's provides weekly -- AND an introduction to a resident who has been there NINE years.
They lost Jack this afternoon with Sophia and Tim beside him. Jack passed surrounded by caring compassionate people who gave him his last warm meal and a bed.
I know it sounds corny, but the seeds we sew often take years to come to fruition.
Well, the fact is those seeds that my congregation helped plant have been producing excellent crops of compassion and care since 1996, and Kansas City is blessed to have this unique facility available.
* * *
GRACIOUSLY SAYING FAREWELL
The Rev. Bruce Reys-Chow, former moderator of the General Assembly of the Presbyterian Church (USA), is a wise voice in my denomination, and proves it again in this piece. He suggests that we adopt an attitude of graciousness as some individuals and congregations leave the Presbyterian Church because of their disagreement over our decision to allow the ordination of otherwise-qualified gays and lesbians. It is, of course, exactly the model those of us who agree with the ordination change should adopt. Indeed, gracious acceptance of differences among people of faith would be a good model for everyone.