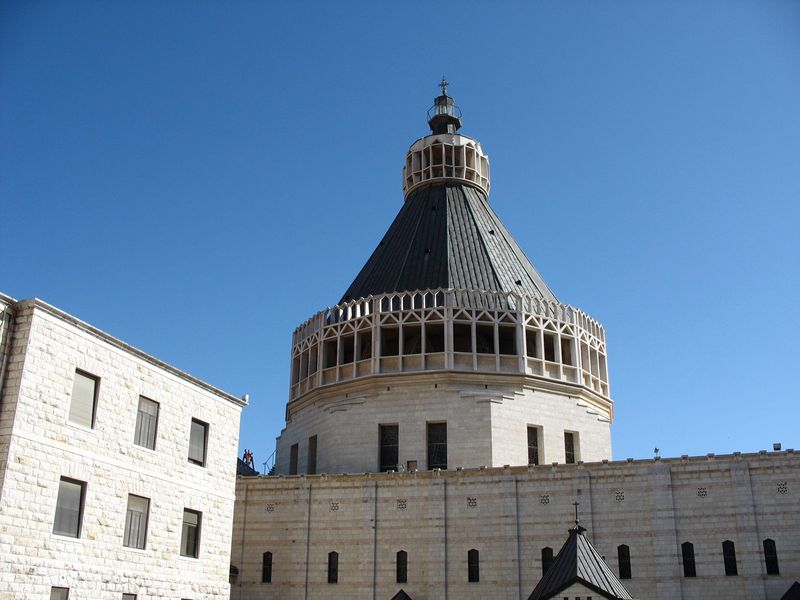 NAZARETH, Israel -- As we were leaving the Basilica of the Annunciation here (seen in the photo above), which commemorates the angel Gabriel's announcement to Mary that she would conceive a holy child, I turned to someone in our tour group and said, "This is the kind of structure you get when local boy makes good." 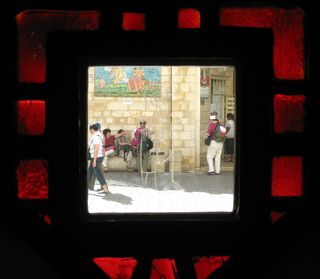 And, indeed, the church is quite a sight to behold, whether you're looking around inside or looking at the street outside through one of the stained-glass-surrounded windows (photo at left).

But it turns out that the local boy who made good, Jesus, was -- and remains -- a divisive figure.

First, of course, while he lived and soon after his death and resurrection, he divided Jew from Jew. Some were convinced he was the long-promised Jewish Messiah and they became members of the Jesus Movement within Judaism.

Others rejected that idea and, when eventually the Christ followers split from Judaism to create Christianity, those Jews stayed with historical, traditional Judaism (in its many forms).

And just as Christians over the centuries have rejected Judaism and, until recent decades, openly accused Jews of being Christ killers (a link to my essay on anti-Judaism in Christian history is found under the "Check this out" headline on the right side of this page), so, too, do Muslims reject Christianity (as well as Judaism).

I found evidence of that rejection on a big sign just down the street from the basilica.

As you can see in the photo on the right, it says that "whoever seeks a religion other than Islam, it will never be accebted (sic) of him, and in the Hereafter he will be one of the losers."

(The closing parenthesis mark on the sign also was one of the losers, but never mind that.)

At first I was disappointed and maybe a bit surprised to see this kind of sign so near a sacred Christian site, but the more I thought about it the more it seemed like a perfectly natural response by people of faith who are convinced that they have it all right.

I personally know many Muslims who would never have put up such a confrontational sign and who genuinely seek to live in harmony with people of many different faiths.

But, as I say, Jesus, known to Christians as the Prince of Peace, has been the occasion for (perhaps not the cause of) much that is not peace. Whether it's Muslims who honor him as a prophet or Christians who assert his divinity, people of faith sometimes seem to dishonor him by failing to live at peace with their neighbors.

The assertive Muslims who put up this sign no doubt would say they simply are trying to communicate truth -- a claim similar to that of assertive Christians who preach hellfire and brimstone.

But in my experience it is impossible to convince people either by silencing them or intimidating them with threats. My guess is that this street sign here in Nazareth accomplishes little except to give Islam a bad name with many Christian pilgrims.

In the What-Are-They-Thinking? Department, some folks in Florida are pushing a state constitutional amendment that would allow state funding of churches, synagogues, mosques and other religious institutions. Maybe it's time for the whole Sunshine State to take a remedial lesson in First Amendment matters.

P.S.: The two classes I'm co-teaching at Ghost Ranch in July are beginning to fill up, so don't wait to sign up. For details about the class on end-of-life issues and the class on forgiveness, click here. Ghost Ranch is a beautiful national Presbyterian conference center in northern New Mexico. One week there will change your life forever.

ANOTHER P.S.: My latest National Catholic Reporter column -- also written from Israel -- now is online. To read it, click here.