I am helping to lead a 10-day Jewish-Christian study trip to Israel. We left the U.S. on April 15. My plan is to post entries about our trip here as I have the opportunity, but that may not be possible daily.

Today our group splits up. A few of us head back to the U.S. while most of the folks move on to a three-day visit to Jordan.

I wish I were part of the group going to Jordan to see, among other places, Petra, but I have to get back to head to the National Society of Newspaper Columnists annual conference in Macon, Ga.

So we'll bid farewell to the Holy Land and begin to imagine what this trip has meant to each of us. 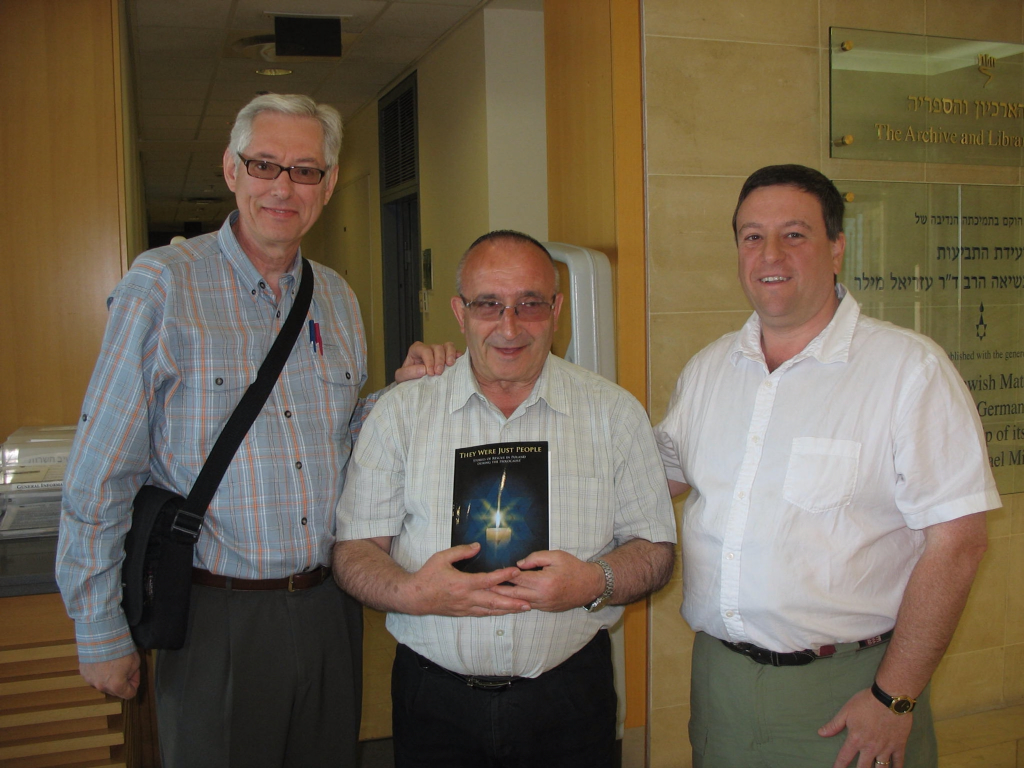 JERUSALEM -- I saw him walking toward us down a long hallway at the archives section of Yad Vashem, Israel's Holocaust museum and authority.

The last time I had seen Fr. Romuald Jakub Weksler-Waszkinel was in 2007 in Lublin, Poland, when Rabbi Jacques Cukierkorn and I had interviewed him to be able to tell his astounding story in our book, They Were Just People: Stories of Rescue in Poland During the Holocaust. (He's holding the book in the photo above of, left to right, me, him and Jacques.)

Since then this Jewish-born Catholic priest and Holocaust survivor has left Poland and moved to Israel to try to better understand his Jewish roots.

The story of his life and his recent decision to come to Israel is told in a compelling new documentary called "Torn." Google it. (I'm having trouble inserting links here on the blog while I'm on the road.)

He greeted Jacques and me and we introduced him to the Jewish and Christian members of our traveling party.

We gave him not only a copy of our book (the one we'd sent to him in Lublin after publication never arrived, he said) containing his story but also a substantial monetary gift made possibly by sales of the book. Fr. W-W is not a wealthy man and Israel is not a cheap place to live. So we hope our gift will make his life here a bit easier.

Fr. W-W speaks only halting English, though he's fluent in French and Polish and is learning Hebrew. We used all those languages to communicate.

Fr. W-W, born a Jew in Poland, was given away as an infant to a Catholic family and eventually became a Catholic priest. Only 12 years after his ordination did he learn that he was Jewish. For the full story, see our book.

This has been a wonderful trip, and having a chance to see this priest again was a highlight for me.

And as one of our trip leaders, Fr. Gar Demo, has reminded us, prayer is one way that people of faith prepare to meet whatever comes along.

Farewell, Israel. I hope to return. (I'll have later blog entries and columns about the trip after I get home.)