CANA, Israel -- As we came back up the steps from the lower level of the Cana Catholic Wedding Church here, which celebrates what the Bible calls Jesus' first miracle, I said to our guide, "When do you think the first same-sex marriage will be celebrated here?" 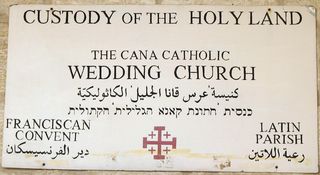 He took it as a joke, and, indeed, I had meant it that way, at least mostly, given the reality that the Catholic and Orthodox Christian world are not yet close to approving gay marriage.

Well, in my view, that's too bad. Marriage is such a wonderful, creative institution that it should be available to all couples willing to live up to its responsibilities in exchange for its privileges. ( And for my essay on what the Bible really says about homosexuality, look under the "Check this out" headline on the right side of this page.) Several of the already married couples (including my bride and me, pictured here) on our Jewish-Christian study trip to Israel used our stop at Cana -- where the New Testament says Jesus turned water into wine at a wedding -- to renew our wedding vows.

Fr. Gar Demo, an Episcopal priest who, with me and Rabbi Jacques Cukierkorn, helped to lead our tour, led us through the ritual as found in the liturgy of the Episcopal Church.

Because several other weddings were in progress in this busy old church, we found a corner in an adjacent lot for our ceremony.

My question about gay marriage here to our guide led to a brief discussion about that subject, though of course we didn't solve the matter. But I suspect that if we were to return here in say, 100 years, gay marriage ceremonies will not be terribly uncommon.

After all, the arc of history, no matter how many painful detours there may be, bends toward justice -- at least as long as people treat others the way they wish to be treated. Now there's a religiously worthy idea. In fact, it's such a valuable idea I'm tempted to call it golden.

P.S.: The annual AIDSWalk Kansas City event, in which I'm walking with members of the AIDS Ministry from my church, is tomorrow. If you haven't yet made a donation but still want to, click here. And thanks.