I am helping to lead a 10-day Jewish-Christian study trip to Israel. We left the U.S. on April 15. My plan is to post entries about our trip here as I have the opportunity, but that may not be possible daily.

Today we are scheduled to journey to the Bet Guvrin region through the Haella Valley where the battle between David and Goliath took place.

Then we'll take part in a hands-on experience at the archeological dig in the caves of Tel Maresha.

Next we continue to the Ayalon Institute and see the underground ammunition factory that played a pivotal role in Israel's fight for Independence. Then we're off to enjoy the entertainers, artists and craftspeople at Nachalat Binyamin and in the Carmel Market in Tel Aviv. 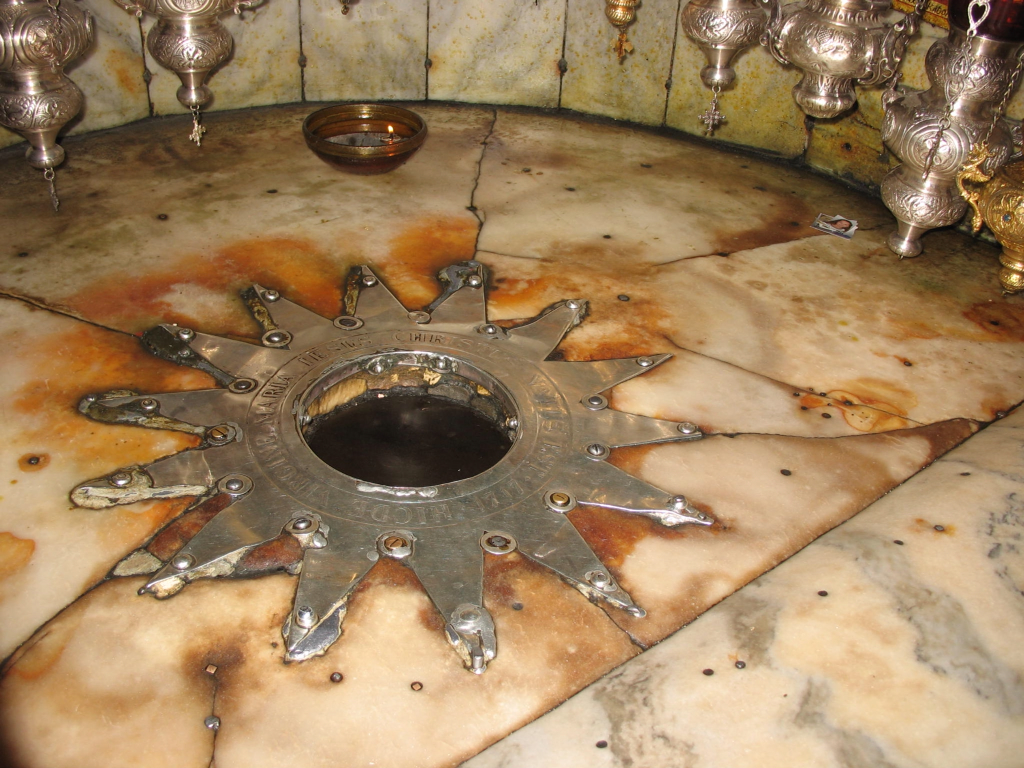 BETHLEHEM -- The last time I was here -- believe it or not, Christmas Eve 1957 -- the car trip from Jerusalem was not easy. My family left from the American Colony hotel on the Jordanian side of the divided city.

And because we next were going to Egypt, we could not go into Israel because Egypt would not let anyone in who was coming from -- or, apparently, had just been to -- Israel.

So our trip was a round-about route to avoid going into Israel, and every few miles Jordanian soldiers stopped our car (a cab, I suppose, though my memory on this point is fuzzy; after all, I was not quite 13 years old) to make sure we weren't up to no good.

We finally arrived and packed into the Church of the Nativity to observe the Christmas Eve service.

On this current trip, we started at our Dan Panorama Hotel in Jerusalem, Israel, and had to go through a border checkpoint into the Palestinian Territory on the West Bank.

Clearly all kinds of things have changed here in 54-plus years but the political situation still is distressingly unsettled.

The Palestinians don't yet have a state. The Israeli's havebehalf now a wall of separation (most of it just a fence, except in crowded areas) and Palestinians have filled it with protest words and art.

And inside the Church of the Nativity, the approved guides move the tourists through and bribe guards here and there to let certain tourists skip the 90-minute wait to see the grotto identified as the exact spot where Jesus was born nearly 2,000 years ago. You can see that spot in the photo here that I took.

The tourism business is difficult in that it depends so much on the political and security situation. Things have been calm in Israel -- on the surface at least -- on this trip and, thus, we have been able to move freely from north to south and even into territory ruled by the Palestinian Authority.

But it's hard to imagine that this is the dream the boy born here to Mary and Joseph (born here according to the Scriptures; some scholars have other ideas) had when he spoke of peace and love.

And yet, in truth, things are not all that much different politically now than they were then, when the Jewish people chafed under harsh Roman rule in a land that over the years has been conquered and ruled by many people.

Will there ever be true peace here, ever a solution that satisfies Israel, the Palestinian people, Arabs, Jews, Christians, Muslims! Druze? I spoke in the old Jerusalem market the other day to a Muslim shopkeeper who has been in business there since the early 1970s. His view? It will never be settled. Never.

Who am I to doubt him?