Earlier this week I spent most of an hour talking about evangelism on an Internet radio show, Fairness Radio, and it was an opportunity to begin to unpack what we mean by evangelism and evangelicals. 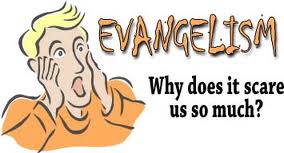 To hear the whole show (I was on about half of it), click here.

Let me give you a couple of exchanges that were part of the show with hosts Patrick O'Heffernan and Chuck Morse.

To begin, Patrick asked me what drives people who are aggressive, in-your-face Christian evangelists.

Patrick noted that "Christianity is not the only evangelical religon. . .They can't all be right, but they could all be wrong."

Me: "It seems to me that at some point every individual has to vote about what you believe about eternity and the creation and its source and all of the eternal questions. Once you commit yourself to an answer, as I've committed myself to the answer of Christianity, I think we still must leave room for the reality that I am a finite human being trying to understand an infinite creator and I'm not capable of doing that. So it's possible that I'm wrong about some stuff, which is where humility comes in. And I think that's what's often lacking in what I would call the more aggressive evangelists out there who simply want you to adopt their way of thinking and will condemn you if you don't."

In response to my comments, Chuck said that "it makes me think of my experience as a conservative coming from a left-wing family and dealing with a lot of left-wingers over many, many years. . .in fact, I just had a weekend with left-wingers, my in-laws, who are to the left of Stalin. But I can tell you that they believe in what they believe in with absolute certainty and they view anyone who doesn't believe with them as less than human."

And he was right that no group has a monopoly on false certitude.

Well, as I say, the conversation went on for more than 40 minutes, and you're welcome to listen to it all plus the guest who followed me.

But as you do I hope you'll give some thought to how you think people of faith should talk about that faith with others -- if at all.

(By the way, one reason I was invited to be on the show is because of this column about evangelism that I wrote recently for The National Catholic Reporter.)

Authorities in Kuwait are considering legislation that could give the death penalty to anyone accused of insulting God or the Prophet Muhammad. I'm not in favor of such insults, but I don't get why a religion needs a government to protect it from mere words and thoughts. That indicates a defensive, weakened religion. Surely Islam is not that. So why can't Islam defend itself without help from a noose-happy government?