Together -- which they rarely are -- Christians and Muslims make up half or more of the world's population. 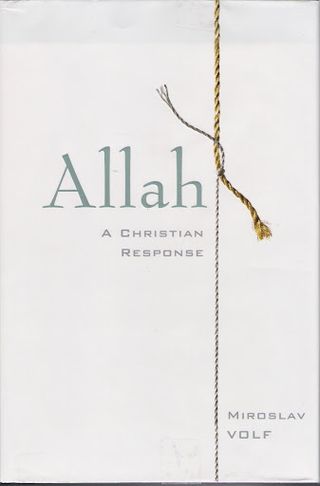 If they misunderstand each other -- as often they do -- there will be trouble. Which we know is exactly what we have in many ways today, more than a decade after 9/11.

Is it possible for Christians and Muslims to understand enough about each other's religion to defuse this trouble, these bad feelings, the polemic and even violence that exist today?

I hope so. But it will take willing hearts, careful education and wise leaders to guide followers toward the path of understanding.

It is a careful, wise, compelling and well-documented book written for Christians, though, of course, Muslims will want to see what's being said here -- and should. Indeed, some prominent Muslim voices have praised the book already.

(Volf spoke at Central Baptist Theological Seminary in the KC area last September and I wrote about it here.)

Volf, who grew up in what then was Yugoslavia, is nothing if not thorough in his examination of the foundational question he raises: Do Christians and Muslims worship the same God? His answer (in harmony with the Qur'an's own answer) is a clear yes -- and that yes has many implications for how and why adherents of the two religions should be getting along.

His thoroughness at times may strike readers as causing Volf to be repetitious -- and there is some of that -- but mostly Volf is simply making sure he considers each question from every possible angle.

There is such rich material here that it's hard to know what to highlight, but one of the most helpful aspects of the book for me was Volf's comparison of Islam's insistence on strict monotheism with Christianity's assertion of monotheism understood through the doctrine of the Holy Trinity.

Volf (pictured at right) goes back in history and finds ways in which important theologians, including Martin Luther, dealt with the question of monotheism and Christianity's Trinitarian approach. In the end, this may be among the most insightful explanations of Trinitarianism I have ever read -- and it should help Muslims understand that Christians are no less insistently monotheistic than they are, both believing that the divine essence is undivided.

As Volf says so clearly: "Everything Muslims reject in regard to God as the Holy Trinity Christians reject as well." (Such as the idea that there are three separate Gods or one main God and two subordinates.)

It would help, of course, if more Christians were better able to articulate what they mean by the Holy Trinity as an expression of monotheism, but as we all know theological (to say nothing of biblical) illiteracy runs rampant in the pews of Christian churches. (As well as in many Muslim and Jewish congregations, my Muslim and Jewish friends acknowledge.)

But as Volf notes, "Much of the confusion about the Trinity is terminological; it concerns the words we use to describe God, who is in many ways beyond words and beyond thought." For instance, in Trinitarian conversations we often use such words as "son" and "person," but in this case they have quite different meanings than they do in ordinary language use.

Volf is not arguing that the Christian and Muslim versions of God are identical. Clearly they are not. But he does insist that their differences are not due to each of them pointing to different Gods. Rather, the differences have more to do with how to understand what, in the end, is beyond words (or numbers) to explain.

Another home run that Volf hits is his unpacking of Pope Benedict XVI's controversial 2006 speech in Regensburg, Germany, about Christianity and Islam. I thought I had grasped what the pope messed up in that speech, but Volf shed new and important light on it -- and why Muslims were so offended (and, frankly, should have been). Similarly, he explained in helpful ways the two careful and quite magnanimous responses to the pope from prominent Muslim scholars.

Ultimately Volf considers how the Islamic and Christian concepts of God should lead us to be in healthy relationship with one another, including a mutual stand against extremism and violence. And, as he wisely notes, all single-cause explanations of extremism are wrong. So we must look at religion, yes, but also beyond religion to politics, economics, the culture and more.

If -- as is true -- both religions teach love and care for fellow humans, then what we need is a deeper commitment to such religion, not less of it.

My hope is that Volf's book will get a wide, fair and open-hearted reading, especially by Christians who think that Islam is somehow inherently violent and extremist. That conclusion simply cannot stand up to a fair reading of that religion, as Volf makes abundantly clear even as he acknowledges the many and important differences between the faiths.

Slowly, material in the Vatican's secret archives is being revealed. A new display will show some material that relates to Turkey. No doubt some material must always be confidential, but the more the Vatican (or any religious headquarters) keeps secret the more suspicious people get that things are being hidden.