A few weeks ago here on the blog, I reviewed When General Grant Expelled the Jews, about Ulysses S. Grant issuing an order that all Jews in the area he was in charge of in the Civil War had to leave.

It was a piece of history about which I knew nothing until I read that engaging account. 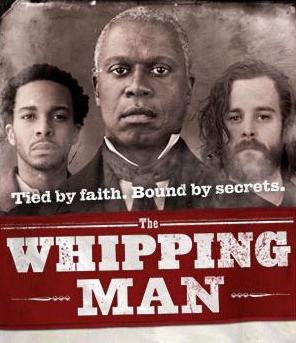 And now, it seems, I'm running into stories about Jews and the Civil War everywhere (small exaggeration). I just saw the Kansas City Repertory Theatre's deeply moving production of "The Whipping Man," which is about -- what else? -- Jews at the end of the Civil War.

Well, to say that the play is about Jews and the Civil War is like saying that Catch-22 is a book about airplanes.

Still, the three characters -- a Confederate soldier and two now-former slaves in the Virginia family home of the soldier -- all are Jews.

The first jarring thing the audience of this play must confront is the idea that there were any Jewish slave owners, given the history of the Jews as slaves themselves in Egypt in biblical times. Well, there were a few Jewish slave owners in the American South at the time of the Civil War, but not many, as this site explains. There were, after all, only about 150,000 Jews total in the U.S. at the time.

"The Whipping Man" was written by Matthew Lopez, whom The New York Times calls "a self-described 'foxhole Episcopalian' from the Florida Panhandle, the son of a Puerto Rican father and a Polish-Russian mother."

And if that and his play's subject aren't enough to convince you that America is religiously and ethnically diverse, you're a sad case.

It's a wonderful play with Jewish culture and ethics woven through it but, in the end, the moral center of the play draws its strength from the universal nature of its values.

I happened at the play to sit behind a local rabbi, Mark Levin, and he told me he was impressed that the people in the play who spoke some Hebrew lines got the language right. I later figured out why: Cantor Paul Silbersher, rabbi emeritus of Congregation Kol Ami, helped the cast with that.

Well, the play runs for another week or so. If you're in the KC area, don't miss it.

PONDERING THE POPE AND CUBA

This Boston Herald editorial about Pope Benedict XVI's recent trip to Cuba makes the excellent point that it's long past time for the U.S. to restore normal diplomatic relations with the country -- especially if we hope to have any influence in what happens there after the Castro brothers are gone.