It's a rare person of faith who hasn't at some point been angry at God. 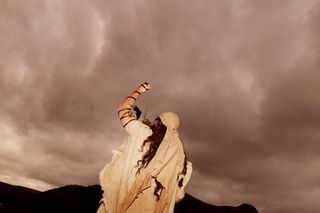 In fact, it's a rare person of faith who hasn't occasionally thought that he or she could do the job better than God seems to be doing it.

But is such anger legitimate? And what should you do if friends come to you and tell you that they are angry at God?

A researcher and psychologist at Case Western Reserve University, Julie Exline, has just published a study that asks questions about protesting against God.

As the press release about the study to which I've linked you in the previous paragraph says, "The researchers discovered if a person views God as cruel, then protest toward God is seen as more acceptable. . .But when people see God as a kind and loving authority figure, then protest seems less acceptable."

And yet in my experience it's precisely people who see God as kind and loving who should be protesting against God when it seems as if God is acting in an unkind or unloving way or, worse, is indifferent.

And it's my experience that Jews are much better at this kind of protest than are Christians. In fact, we Christians could take a lesson from the brilliant French Reformed theologian Jacques Ellul, who in his book Hope in Time of Abandonment, argues that “it is not for us to sit in weary resignation by the side of the road waiting for things to change.”

“Hope,” he says, “is the opposite of resignation.” And sometimes, he writes, “it is God who needs to change, and hope is the resolute will to make God change.”

The will to make God change requires us to protest against what we believe God is doing or not doing.

All of this protesting, of course, must come in the context of our understanding that we are creatures and not the Creator, that we are fallible human beings. Still, even Job was right to protest that he had done nothing to deserve what he was getting in life. And there are proper times to join our voice with Job's.

By the way, Exline's research into this and related questions continues and you can be part of it at this website.

STATES OF IGNORANCE OR BLISS?

What are the most and least "religious" states in the U.S.? Well, a new Gallup study lists them this way:

The most religious states:

And the least religious states:

Is this useful information? And what, if anything, does it really mean? I can't say that I know the answers to either of those questions, but maybe that's just my natural skeptism about polls.