If you haven't already received what columnist and author Karen J. Rinehart calls "The Call," you almost certainly will. 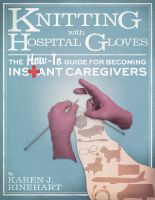 It's the call that tells you someone close to you is terribly ill or injured and it means you've just become what she calls an instant caregiver.

Karen, whom I've met through the National Society of Newspaper Columnists, has written a great little guide that's a Smashwords e-book on how to perform your task as instant caregiver. It's called Knitting With Hospital Gloves, The How-To Guide for Becoming Instant Caregivers.

One of the things I most appreciated about this really helpful littlel book is that Karen remembers that there is a role for faith communities even if you are a single instant caregiver in a community that is not your own. She writes this bit of advice:

"Let your parents' minister/rabbi know they're hospitalized and see if they have a program to aide parishioners in crisis. Let's say your parents aren't religious but you're a die hard attendee—call the local church or synagogue of your denomination and seek support, prayers and references."

Because this is an e-book, you can download it to your laptop or iPad and have it with you after you get the call that says you need to catch a flight today to Sacramento and head for the hospital where your father is being treated for a stroke.

The book will help get you through all of that because Karen has been through it several times herself and knows what she's talking about.

It's good to be reminded from time to time that ideas have enormous power to change lives and even the world. That's an important take-away from Pope Benedict XVI's visit to Cuba, where yesterday, before meeting with Fidel Castro, he gave what the Associated Press described as an "unusually political speech." Well, that's an understandable way to interpret it. Another way is to say that B-16 was rightly standing up for a vital idea -- the foundational human right of religious freedom -- and speaking truth to power.

P.S.: And for the good interview my friends at ReadTheSpirit.com have done with Bishop N.T. Wright about his new book (I reviewed it here), click here.