Prison is one of the more demanding places in which clergy serve. And yet it's hard to imagine a place -- besides perhaps the military -- where their services are needed more. 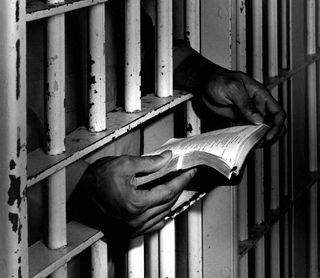 But careful studies about prison chaplains are rare, which is why I was pleased a few days ago to learn that the Pew Forum on Religion & Public Life has just released such a study.

The study contains some interesting and even surprising findings. One that has got some play in the media is that the state prison chaplains included in the study report that lots of proselytizing goes on among prisoners.

And partly as a result of that, they say, quite a few prisoners end up switching religions while in prison. The two faiths to pick up most converts, they say, are Protestant Christianity and Islam.

I also found it intriguing, though not surprising, that the chaplains themselves are overwhelmingly white, middle-age and come from churches that would describe themselves as conservative or evangelical. That's also certainly true among military chaplains, though my guess is they are as a rule somewhat younger than prison chaplains.

Journalist and author Jeff Sharlet has written extensively about military chaplains. Click here for an example of his work.

Well, you can read the Pew study for yourself. As for me, I'm glad there are people willing to be prison chaplains. I've met some of them and know they perform an important function.

Score some p.r. points for Pope Benedict XVI who, reported the Associated Press, "with his first visit to Mexico. . .appeared to lay to rest the impression that he is a distant, cold pontiff who can never compare to the charisma and personal connection forged by his predecessor."

@stickyJesus: How to Live Out Your Faith Online, by Toni Birdson and Tami Heim. Christians are called to have and use a prophetic voice. That doesn't mean they are to go around predicting the future. Rather, it means that they are to speak out in favor of eternal values such as love, mercy and justice that their faith teaches. But Christians can't do that in any thorough way today if they are not using such social networking tools as Facebook and Twitter. This books challenges Christians to do just that and then provides both a theological justification for why they should and some practical hints about how to do it. All well and good. But given the speed at which social networking tools have exploded in recent years, this book feels as if it's several years late. It was at least three years ago that I taught a weeklong seminar at Ghost Ranch about exactly this topic. I wish I'd had this book then as a resource. The authors (or their editors) also have gimmicked up the book in sometimes-cute, sometimes-annoying ways to make the book seem as if it's being read online or something. And it has something of what might be described as a conservative theological atmosphere -- one in which, for instance, the "gospel" seems to focus more on personal salvation than on what Jesus meant by "gospel," which was the in-breaking of the reign, or kingdom, of God. Still, there are helpful ideas here, especially for Christians who have been reluctant to embrace social networking tools and don't really know where to begin or why.

P.S.: Over this past weekend here on the blog I reviewed Bishop N.T. Wright's new book, How God Became King. Yesterday, my friends over at ReadTheSpirit.com did this entry about that same book.