The other day I moderated a panel of speakers about prayer and health for an interfaith luncheon given by the Greater Kansas City Section of the National Council of Jewish Women. 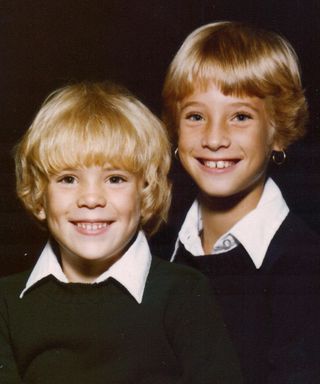 As always, it was a lovely event in which I learned much from, in this case, Jewish, Muslim and Buddhist speakers.

One of them offered a wonderful quote I'd never heard before from the great Jewish scholar and leader Abraham Joshua Heschel. It goes like this:

"Prayer is our humble answer to the inconceivable surprise of living."

Indeed, the fact that any particular one of us is here is astonishing. Each of us has beat enormous odds. Just in biological terms, the odds were greatly against the possibility that one of my father's millions of sperms would, on one particular day, find one of my mother's eggs and begin to divide to produce a fetus who became me.

And if that had not happened, neither of my smart and beautiful daughters would be alive today. And I give special thanks for all that today because one of them is celebrating today her 40th birthday (also a miracle given that her father is only 42, or thinks he is). The photo here today shows these girls when they were just a bit younger.

How can our response to such odds be anything but a prayer of astonishment and thanks?

The larger question, of course -- the one all religions prod adherents to answer -- is this: Now that we have been given the inconceivable (no pun intended) of life, what will we do with it that will matter?

How people think through religious matters is often fascinating, especially when it leads to growth and change. New York Times columnist Frank Bruni tells in this column of his experience with a Catholic he knew in college and how that man discovered that real life, versus what he wanted life to be, helped to determine his one response to his faith.

Forgiving the Unforgivable: The Power of Holistic Living, by Master Charles Cannon with Will Wilkinson. No doubt most of us remember -- with horror -- the terrorist attack in late 2008 in Mumbai, India, in which 166 people died. The author was leading a group of 24 spiritual seekers staying at that hotel at the time, and this book tells the story of how 22 of them survived and two perished. Beyond that, it's the story of how those in his group found the strength to forgive the terrorists and move on with their lives using spiritual techniques associated with both Eastern religions and New Age movements. The essential concept is that "all individuals are unique parts of the one human race." That must become deeply engrained in us, the author argues, for us to be able to move beyond the wounds the world inevitably will give us. No doubt the idea that people who forgive are "for giving" is not unique with Cannon, but it's a helpful image that gets some play in this book. Despite Cannon's profession that we are all one, I found him being divisive in his description of people who are adherents of traditional religions. He writes that they are "dominated by illusion and simply can't understand. The idea of a spiritual master helping them is completely foreign and distasteful." In such people, he says, "the ego is dominant and it is totally authority-phobic. It wants no other authority than itself and will negate all other authority." It seemed like an unnecessary attack in a book preaching wholeness, oneness and forgiving. I also found myself wanting to get on with the story of what happened in the Oberoi Hotel in Mumbai in the attack and how those who experienced it survived. But that story kept being delayed by long passages of praise of Cannon's spiritual approach. Perhaps the better way to have written this book would be to tell the attack story first and then describe how one's spiritual approach helped to handle it.

As I've indicated before, I'm cutting back on the number of books I will review but I still want to be able to alert you to the publication of what may be books you'd enjoy reading. So I will list a few more here today:

* A Heart on Fire: Catholic Witness and the Next America, by Archbishop Charles Chaput. This is a 19-page, 99-cent e-book due out Tuesday from Image Catholic Books, a division of Random House. Here's what the Philadelphia Inquirer had to say about it. (Chaput is the Catholic archbishop in Philly.)

* Stolen Innocence, by Elissa Wall, with Lisa Pulitzer. The subtitle is "My Story of Growing Up in a Polygamous Sect, Becoming a Teenage Bride, and Breaking Free of Warren Jeffs." Recently I wrote here about a book with a similar theme but from an Amish perspective. And in 2009 I wrote here about another young woman who escaped from the FLDS -- the Fundamentalist Church of Jesus Christ of Latter-day Saints, a renegade Mormon offshoot. This is an account in that same genre.

* Spiritual Rhythms in Community: Being Together in the Presence of God, by Keith Meyer. The author is a pastor and seminary adjunct professor who operates Becoming the Change Ministries.

* The Misleading Mind: How We Create Our Own Problems and How Buddhist Psychology Can Help Us Solve Them, by Karuna Cayton. The author, a student of Tibetan Buddhism who lived in Nepal for 12 years, is a psychotherapist and business psychologist.

* Missing: The Secrets of Crittenden County, by Shelley Shepard Gray. I usually don't review novels, but this murder story is set in a small Amish community and I thought it might interest some of you. It's the first of a projected trilogy. This one's also available for your Kindle.

P.S.: I mentioned here on the blog recently that I'd done an Internet radio interview with Everyday KC about faith in our community. It aired Sunday morning for the first time but you can listen to it by clicking here and then clicking on the "KC's Faith Community" show. The first 10 minutes or so will be the hosts, Duane Daugherty and Rachel Ellyn, talking about various other things. Then there's a brief break and then our conversation.