Ever since my stepson Chris came into my life more than 16 years ago, I have been sensitive to how faith communities relate to people with developmental disabilities. 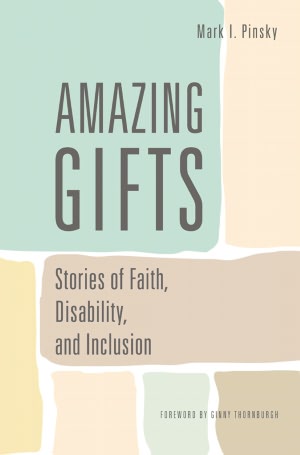 Chris has a seizure disorder that has led to mental retardation. But he loves people, wants to hug everyone in the world and he loves going to church.

I'm pleased to report that for the most part he has encountered friendly people who are welcoming. But that's not always the experience of people with such disabilities.

As Mark Pinsky reports in his wonderfully helpful new book, Amazing Gifts: Stories of Faith, Disability, and Inclusion, faith communities have a lot to learn about how to welcome and minister to people's with disabilities. Indeed, as Pinsky notes, about one in six Americans deals with some kind of disabling condition -- from mental health issues to physical limitations.

Pinsky, an excellent journalist whose stories about religion I've enjoyed reading for years, offers in this new book a compendium of stories about how different churches, mosques, synagogues and temples are working to welcome people with disabilities (or how they have failed) to do so.

Partly because of such failures, research Pinsky mentions shows that people with disabilities are less likely to attend religious services at least once a month than are people without disabilities.

One of my favorite stories in this book is about how St. Andrew Presbyterian (well, of course, I'm one) Church in Albuquerque, N.M., welcomed a young man named Rob, who had behavioral disabilities, into the congregation. The story shows that the beneficiaries of a welcoming attitude aren't just the people being welcomed but also the ones doing the welcoming.

That and other stories in this book reminded me of what the great German theologian Jurgen Moltmann once said, which is that congregations without people who have disabilities are themselves disabled congregations. Moltmann's brother was severely disabled and was euthanized (read murdered) by the Nazis.

In the end, the book becomes guidance for congregations -- not just about adapting their worship space to accommodate wheelchairs but how to adapt the hearts of congregants to welcome all people.

For fans of odd religious news, here's a story about underage drinking and drag-racing (well, sort of) by Amish youth. I'm thinking some kids will be grounded until retirement age.

What Really Matters: 7 Lessons for Living from the Stories of the Dying, by Karen M. Wyatt. The author, a physician, has spent many years as medical director of a hospice. Out of that experience she draws lessons for the living -- all of whom, of course, are also dying. I'll be co-teaching a class at Ghost Ranch in New Mexico this summer on end-of-life issues, and Wyatt's book is one participants may well want to read. For one thing, it reminds us of how much America is a death-denying culture. A stark measure of that, Wyatt reports, is that about one-fourth of the annual Medicare budget is spent on aggressive, life-sustaining care in the final months of life, "much of which is futile and may actually prolong suffering rather than enhance life." Wyatt has a tougher job contending (but not really conclusively) that "suffering is ultimately a gift, a divine assistance for your spiritual growth." She's right that we should "embrace and embody suffering, making it your own, in order to transform and transcend suffering." Her section on forgiveness, though good, was compromised by the misguided notion that Judaism did not have "the concept of a merciful God" until "Jesus introduced" it. Taken to its extreme, such ideas amount to the religious bigotry known as anti-Judaism (and for where that can lead, look for my essay on the subject under the "Check this out" headline on the right side of this page). And to call the concept of people forgiving one another a Jesus idea that was "totally revolutionary" is to reveal evidence of a lack of understanding of -- and appreciation -- for Judaism, no matter how much some of its leaders at the time of Jesus were in the pockets of the Roman rulers and, thus, not serving their people well. Those matters aside, there are some compelling personal stories in the book that people moving toward the end of their life or people caring for the frail elderly should find helpful.