For many reasons the Amish fascinate those of us who aren't Amish. 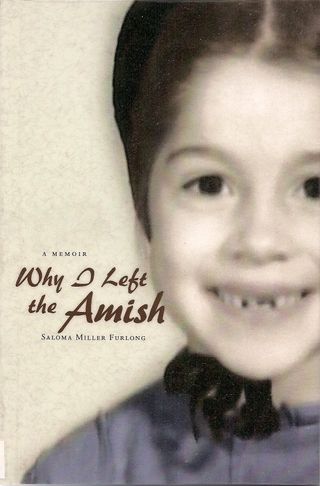 Indeed, sometimes we imagine how lovely and simple life would be if we, like them, somehow were living in the 1830s (or so) without electricity or all the crazy bother of modern technology. It strikes us as bucolic, rustic, wonderful -- and all underpinned by a strong faith and a tightly woven sense of community.

Well, no doubt that lovely picture is true for some of the Amish. But if the experience of Saloma Miller Furlong, as described in her new book, Why I Left the Amish, is in any way typical, that peaceful picture of Amish life is far too one-dimensional.

Furlong, who grew up in a large Amish family in Ohio, describes a life at once simple and complex. And that's part of what makes this such a compelling read.

But I think it's important that we not universalize her critique of her Amish life so that somehow we imagine that life is like that for all the Amish. The reality is, as she acknowledges, she left the Amish mostly because her father was uncontrollably abusive in violent ways. Indeed, the picture she paints of her parents and their vastly different skills as parents is distressing not because they are Amish -- though clearly that complicates already difficult matters -- but because they seemed to have no idea how to be loving parents in healthy relationship to their children.

"In a close community," she writes, "(a) lack of self-confidence is seized upon -- the people at the top stay there by putting others down. And the ones near the bottom see this and join in on the belittling, hoping they might improve their own standing."

This was her experience both within her own family and within the larger Amish community of which her family was a (low-on-the-social-order) part. And her extravagently dysfunctional father felt "like an outsider within the community all his life."

Once Furlong (pictured here, as well as on the book's cover) left (escaped quietly is a better description) her Amish community when she was 20 years old, "they shunned me, which means they couldn't eat with me, accept gifts from me, ride in cars driven by me or do business with me." This didn't matter all that much because Furlong had moved to Vermont, but it came into play in various ways when she returned for her father's funeral.

It is striking that Furlong and all of her sisters left the male-dominated Amish way of living, while her brothers stayed -- though even in that regard she acknowledges that some of her sense of not fitting related not just to Amish community rules but to her own personality: "I would have needed to be endowed with a whole different personality to be able to conform to the Amish ways."

And yet the insularity of the community made life different not just for her but for everyone. Three of her siblings, for instance, married second cousins -- a common practice in her community. And most of the boys Saloma dated before marriage "turned out to be my second cousins," she writes.

Furlong is relentless and even fearless about describing what went wrong within her family and her community. She relates in painful detail, for instance, how her brother sexually abused her and the many times her father got violent with her and her sisters -- though not with their mother.

One of the things that made leaving her Amish community so difficult, she writes, is that "when one leaves the fold -- then all hope is lost for that person's salvation." Somehow she had to decide whether she believed that to be true and, even if she did, whether having an unknown number of years of relative happiness outside her family and community was worth eternal damnation. After considering, but rejecting, suicide, she voted yes on leaving.

In the end, she wrote a note to her mother saying, "I'm leaving because of Datt's (Dad's) violence. I can't live like this anymore. You had a chance to get help for him, and you didn't."

Despite all of that, she was glad she returned to Ohio for her father's funeral, partly because she hoped her presence "conveyed to them (her family and former community) that I wish to honor their long held traditions."

In some ways I wish the book's title could have conveyed this better, though I acknowledge that "Why I Left My Amish Family and, Thus, the Whole Amish Community" is too cumbersome, even if more accurate.

People of Cuban origin in Florida are quite hopeful that Pope Benedict XVI's upcoming trip to Cuba in March will be a significant event that will help transform life on that island, it's reported. I find it hard, after so many decades of dictatorial rule, to be too optimistic about immediate change there, but it's also hard to imagine that the Fidel/Raul Castro era will last much longer. But then what? May the pope encourage the growth of freedom -- both religious and political -- next month.