When thinking about terms widely used among people of faith, particularly but not exclusively meaning Christians, the word "salvation" is hard to miss. 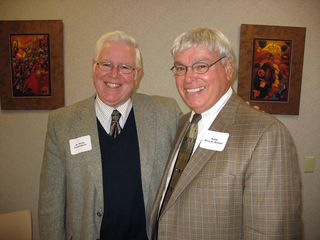 But it may not mean the same thing to all people -- even people of the same faith. Which is why when ideas about salvation are brought to an interfaith context, great care must be used to be able to understand one another.

On Monday of this week at a seminar for clergy on Jewish-Christian relations, that point was made abundantly clear by Philip A. Cunningham (left in photo), director of the Institute for Jewish-Catholic Relations at Saint Joseph's University in Philadelphia. He and Alvin K. Berkun (right in photo), rabbi emeritus of the Tree of Life Congregation in Pittsburgh, were the two speakers in this series of seminars guided by Rabbi Alan Cohen, director of interreligious affairs here for the Jewish Community Relations Bureau/American Jewish Committee.

Cunningham was highlighting the main points in a new book (of which he's a co-author) called Christ Jesus and the Jewish People Today, just published by William B. Eerdmans Publishing Co. and Gregorian & Biblical Press in honor of the recent 45th anniversary of the release of "Nostra Aetate," the Vatican II document on Catholic relations with Jews and other people of faith.

"We realized that what we mean by salvation varies across Christian traditions. . .Sometimes we forget that it has an eschatological (end times) dimension, that we are all praying that the kingdom come and that things will happen on that day that aren't prevailing currently. And that salvation is intertwined with the notion of being in covenant with God. . .

"Salvation is so multi-layered and textured that the Catholic Church has never specified a formal definition. You have catechism definitions of it but they will vary from catechism to catechism. . .In the Christian tradition, the experience and anticipation of salvation has been richly described in terms of redemption, reconciliation, sanctification and incorporation into the divine life or as being freed from sin, oppression, meaninglessness or death."

That broad range of possible meanings, of course, makes the old "Are you saved?" question seem like what it often is -- simplistic and less of a search for a real answer than a challenge to adopt the theology of the one asking the question.

As for me, when Christians of a certain persuasion ask me when I was saved, my usual response is this: "It was a Friday afternoon about 2,000 years ago." More proof that God sometimes offers salvation even to a smart-aleck.

AND IT WOULD HELP IF THEY COULD GOVERN, TOO

A new survey shows two-thirds of Americans think it's important for presidential candidates to have strong religious beliefs. Kind of an intriguing finding in a nation whose people are said to worship 300 million different gods. Because religious and biblical illiteracy is so rampant in America, my guess is that what people responding to this survey really want are candidates with good core values, which they rightly perceive can be the products of religion.