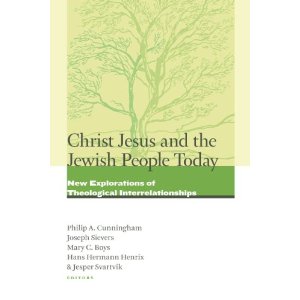 Today I want to take a bit of a broader look at it.

I call it fascinating for several reasons, not the least of which is that it focuses on the relatively new (less than 50 years) serious dialogue between Catholicism and Judaism, and that converstion is both lively and vital.

Indeed, that conversation began not long after the Second Vatican Council issued the document called "Nostra Aetate," which for the first time in the history of the Catholic Church declared that Jews should not be considered collectively guilty of the death of Jesus. This came after almost 20 centuries of virulent anti-Judaism taught by the church. For my essay describing that history, look under the "Check this out" headline on the right side of this page.

So Catholic-Jewish dialogue is important, as is the broader Christian-Jewish conversation, partly to help Christians understand our own sordid history of treating Jews as pestilent. And this book, including an excellent "Foreward" by Cardinal Walter Kasper, can help with all of that.

But another reason the book is fascinating is that it reveals again Christianity's need to understand what it got so wrong for so long and to repent of that. No doubt many Jews are grateful this finally is happening, but in some ways they must ask themselves, "How is this about us?" The analogy I'm about to use breaks down in many ways, but it's sort of like a divorced man who was an abusive husband finally deciding to get therapy, and the divorced wife, while she may be glad of that, knows that this is almost entirely about him, not her. She's long ago moved on.

As I say, that analogy helps only a little in understanding Christian-Jewish dialogue today, but when Catholic scholars are digging so deeply into not only what went wrong but, more to the point, how the church's relationship to Judaism can be healthy today, there's a sense in which it's all about Catholic (and, more broadly, Christian) needs, not Jewish needs.

And yet the reality is that Christianity is the 800-pound religious gorilla in the world, with more than 2 billion people identifying themselves as Christian, compared to only about 13 million Jews. So whatever Christians (about half of whom are Catholic) do matters to everyone.

That's a long preface to this book, which I highly recommend to anyone who cares generally about interfaith relations and specifically about Christian-Jewish dialogue. It is in some ways not an easy read, not only for the references to the bleak history it raises up but also because it's written by theologians who often use language that is not readily accessible to lay people in congregations, whether Christian or Jewish.

Indeed, in his Foreward, Cardinal Kasper says that the initial exploration of core issues between Jews and Christians "should take place between specialists on an academic level and not be part of the official dialogues."

In the end, this book and the work it represents is concerned with one core question -- how, as Kasper puts it, "to relate the universal saving significance of Jesus Christ to Israel's ongoing covenantal life with God."

As you can see, that is very much a Christian-formulated question. Judaism, after all, does not recognize "the universal saving significance of Jesus Christ." But if Christians and Jews cannot stand where they stand on that issue, the idea of dialogue is pointless. Each must come to the table being fully what and who it is.

Perhaps the most that can be hoped for in this on-going conversation (and thank goodness for its existence) is mutual respect, which would be a big step forward from what has been the case throughout history.

Tolerance isn't a very high standard. But when you start with the followers of Jesus labeling Jews Christ killers and, in turn, first century Jewish leaders labeling followers of Jesus heretics -- and when this whole antagonism (fostered almost entirely by official Christian teaching for centuries) finds its horrific nadir in the Holocaust in which six million Jews were murdered only because they were Jews -- tolerance represents real progress.

And this important book is evidence of that.

Christians, of course, are far from the only group to engage in anti-Judaism and antisemitism. Much of the antisemitism in the world today, as I've noted before, is coming from radical elements within Islam. And as this piece makes clear, even the Arab Spring movement contains increasingly visible antisemitic elements. It's all so sad because it's all so unnecessary.

ANOTHER P.S.: For your holiday giving this year, may I immodestly suggest that you give family members and friends one of my two books that you yourself (surely) already have read: They Were Just People: Stories of Rescue in Poland During the Holocaust, co-written with Rabbi Jacques Cukierkorn, and/or A Gifit of Meaning, a collection of my more serious columns from The Kansas City Star. If you prefer to order directly from the University of Missouri Press, call 800-621-2736. Or if you're in the Kansas City area, see me or Rabbi Cukierkorn for the first book. Or buy yourself and your significant other an April Jewish-Christian study trip to Israel, led by me, Rabbi Cukierkorn and Father Gar Demo. For details, click here.