Did Jesus found Christianity -- and, by extension, the Christian church? 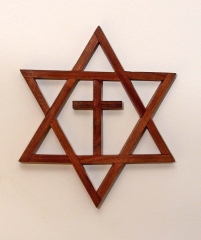 Well, over the centuries various branches of Christianity have spoken to that question, perhaps none so strongly in the affirmative as the Catholic Church.

For instance, in the Handbook for Today's Catholic, which includes a foreward by a cardinal and an "imprimatur" indicating the church approves its contents, Section 8 on page 24 has this subheadline: "The Church: Founded by Jesus Christ." It describes various ways in which Jesus' actions can be understood as him purposefully founding the church in his lifetime or immediately thereafter, and concludes by saying that "Jesus' founding of the Church was completed with the sending of the Holy Spirit. The actual birth of the Church took place on the day of Pentecost."

Today, however, even Catholic scholars are calling this rather simplistic narrative into question. For instance, in Christ Jesus and the Jewish People Today, a fascinating new book I will review later here on the blog, John T. Pawlikowski, O.S.M. (meaning a priest who is a member of the Order of the Servants of Mary, a Catholic mendicant order), professor of social ethics at Catholic Theological Union in Chicago, suggests it's historically inaccurate to say that Jesus founded the church.

"Can we," he asks, "continue to present the church as a distinct, separate institution founded by Jesus prior to his death? I frankly do not think we can, even though we continue to proclaim that message on Holy Thursday in particular. Our theological assertion in this regard must become far more nuanced in light of the new historical research. Admittedly such a reformulation will test the faith of many in the church."

But it won't change the core of the faith to acknowledge some historical realities. And it will have the benefit of giving Christians a better place to stand in trying to understand why the church preached a virulent anti-Judaism for centuries, even up to 50 years ago. (For my essay on that history, look under the "Check this out" headline on the right side of this page.)

Pawlikowski quotes the scholar Robin Scroggs as concluding that the movement Jesus began can best be described as a reform movement within Judaism, that Paul's missionary work was a Jewish mission that focused on the gentiles, that prior to the destruction of Jerusalem in 70 C.E. there was no such reality as Christianity and that even though some later sections of the New Testament show signs of a movement toward separation, they also mostly retain contact with their Jewish context.

Pawlikowski also comments on what has become known as the "parting of the ways" movement among scholars studying how Christianity became a separate religion from Judaism. In this section he quotes scholar David Frankfurter as suggesting there was no distinct Christianity "before at least the mid-second century."

"Surely," Pawlikowski concludes, "we can no longer glibly assert that 'Christ founded the church' in his own lifetime if we take seriously, as I believe we must, that the church evolved out of Judaism quite gradually over a couple of centuries and that there was no distict religious body called 'church' in Jesus' own lifetime and for decades thereafter."

As I say, this acknowledgement can have profound implications for the way in which Christians relate to Jews even today. But I'll talk more about that when I focus more broadly on the new book from which I've quoted Pawlikowski today.

Pope Benedict XVI says all institutions should be held to strict standards when it comes to sexual abuse of children. Certainly true. But it's hard for the leader of the Catholic Church to say that now and not have it sound a bit defensive.

P.S.: For your holiday giving this year, may I immodestly suggest that you give family members and friends one of my two books that you yourself (surely) already have read: They Were Just People: Stories of Rescue in Poland During the Holocaust, co-written with Rabbi Jacques Cukierkorn, and/or A Gifit of Meaning, a collection of my more serious columns from The Kansas City Star. If you prefer to order directly from the University of Missouri Press, call 800-621-2736. Or if you're in the Kansas City area, see me or Rabbi Cukierkorn for the first book. Or buy yourself and your significant other an April Jewish-Christian study trip to Israel, led by me, Rabbi Cukierkorn and Father Gar Demo. For details, click here.