As I've been heading up a strategic planning committee at my church since July, I've time and again learned that sometimes what's important to one person about worship is utterly meaningless to another. 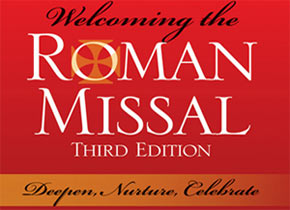 But the one who considers it important often is ready to battle to the near-death to preserve whatever it is.

I don't quite understand all that, but I know it's true. Which is why I'm feeling some pain this weekend for my Catholic brothers and sisters. On Sunday parishes around the country are having to switch to a new English translation of the Roman Missal, which means changing some of the familiar words they say at Mass.

This new translation has been years and years in the making, and it has been nothing if not controversial for many reasons.

One view of all that can be seen in this recent editorial about it in The National Catholic Reporter, which laments some of the new wording but suggests there's nothing to be done about it now, so Catholics might as well learn to live with it.

The blogosphere (and elsewhere) is full of Catholic angst over the inauguration of the new translation, such as this recent piece. And, once again, the church will divide up between those who love the new version and those who loathe it, with many Catholics in the middle.

That's just the way it is in the life of faith, I guess.

But there's another lesson I've learned in the planning work I've been helping to do for my congregation: People don't fear change as much as they fear loss. In the case of the new missal, it sounds to an outsider like me as though lots of Catholics are feeling real loss along with just change. My guess is the church could have done things differently to avoid that. But maybe not.

If you are Catholic and want help understanding not just the new Mass but also the essential nature(s) of Catholic prayer, you would do well to get a copy of a new book by Catholic writer Mary DeTurris Poust, The Essential Guide to Catholic Prayer and the Mass. In addition to a pretty comprehensive look at prayer and what it means to be in relationship with God in that way, Poust has devoted a good part of this helpful book to the new English translation of the Roman Missal, including some history of how and why it came about. She doesn't take the side of the strong proponents of a translation closer to the Latin or of those who are profoundly unhappy with the changes, but she does acknowledge (and even quotes Pope Benedict XVI to this effect) that many will find these changes difficult to adjust to. In the end, Catholics of many persuasions will find this book a useful guide to deepening the meaning of prayer.

A QUESTION FOR THE SAGES

We have entered the secularized winter/Christmas/Hanukkah/Kwanza silly season, which means someone will start asking questions like, "What religion are the Muppets?" You will forgive me if I seem reluctant to weigh in on this question. I worry that it might lead to some kind of syncretistic Marionetteology.

P.S.: For your holiday giving this year, may I immodestly suggest that you give family members and friends one of my two books that you yourself (surely) already have read: They Were Just People: Stories of Rescue in Poland During the Holocaust, co-written with Rabbi Jacques Cukierkorn, and/or A Gifit of Meaning, a collection of my more serious columns from The Kansas City Star. If you prefer to order directly from the University of Missouri Press, call 800-621-2736. Or if you're in the Kansas City area, see me or Rabbi Cukierkorn for the first book. Or buy yourself and your significant other an April Jewish-Christian study trip to Israel, led by me, Rabbi Cukierkorn and Father Gar Demo. For details, click here.