This weekend I want to go back to the year of my birth, 1945, and remember an astonishing way in which at least some German officials were held accountable for the Holocaust. 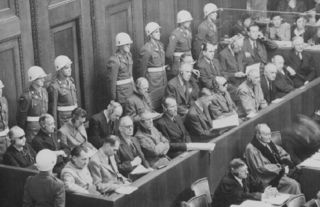 That's because the Nuremberg trial of 21 Nazi war leaders began at 10 a.m. on Nov. 20, 1945. The Nuremberg International Military Tribunal announced its verdicts on Oct. 1, 1946, convicting all but three of the defendants for crimes against the Jewish people -- crimes, as the U.S. Holocaust Memorial Museum notes, that included murders, wrongful imprisonments, tortures, rape, theft and other sorts of destruction.

Several things about the Nuremberg trials have always stood out to me. One was that the trial was begun within months of the end of the war. (By the way, the link in this paragraph will take you to a wonderful site created by faculty at the University of Missouri-Kansas City.)

Justice delayed often winds up being justice denied. And the international community, shocked by the reality of the extent of the Holocaust, seemed unwilling to wait around for the right moment to hold such a trial. Getting it done sooner rather than later was vital.

But beyond that, the trials in effect created a means to begin the process of reconciliation.

As German theologian Jurgen Moltmann wrote a few years ago in Theology Today, "The politics of reconciliation replaced the old German 'realpolitik' power-politics. It began with the Nuremberg trials, which brought some justice into our bloody history, and with the Stuttgart Confession of Guilt made by the Protestant Churches in the summer of 1945."

It remains for historians and others to determine whether the German move toward reconciliation ever has been completed or, as I suspect, there still are some who wish Hitler had succeeded completely, instead of just two-thirds, in wiping out European Jewry.

But when a public evil occurs, something like public accountability for it must occur, too. That's what started to happen at the Nuremberg trials and, later, with South Africa's Truth and Reconciliation Commission after the system of apartheid was dismantled. All of this speaks to the human capacity for forgiveness and re-creation.

CONVERSION OF A CATHEDRAL

The famous Crystal Cathedral in California now will belong to the Catholic Church. The famous church that Robert Schuller founded has filed for bankruptcy, which apparently is what sometimes happens when churches spend way more than they take in. Whoda thunk?