When I re-introduced myself to Bishop John Shelby Spong at Unity Village this past Friday (we first met at a conference near Washington, D.C., a few years ago), I gave him a business card containing my blog address and told him that if he checks in here regularly I'd eventually offend him. 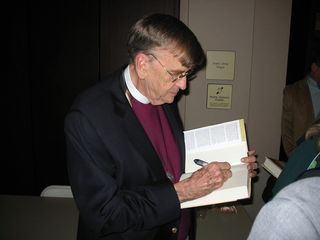 Indeed, that's true of this renegade Episcopal bishop, who was at Unity to talk about "A New Christianity for a New World." By his own count, Spong has had more than a dozen serious threats against his life, though never, he likes to note, from an atheist or a Buddhist.

Spong revels in making Christians think by challenging their core beliefs. And he has done just that -- again -- in his latest book, Re-Claiming the Bible for a Non-Religious World. If you are a Spong fan, you will love it. ". . .we need to ask," he writes, "just how the claim made by anyone that the Bible in any sense is the 'Word of God' can be sustained even for a moment without violating every rational faculty that human beings possess." (The photo on the left shows Spong signing copies of this new book at Unity on Friday.)

And for the next 400 pages, in often-fascinating detail, he deconstructs the Bible. Over the years I find I disagree with Spong about 60 or 80 percent of the time, but he's always worth hearing or reading for that other 20 to 40 percent that he helps me understand in new ways. And so it is with his new book.

And so it also was with his talk here this past Friday.

Being his normally provocative self, Spong began by suggesting that the old symbols Christianity uses are bankrupt but that we don't yet have new symbols to replace them, so people are anxious.

Among the "bankrupt and inoperative" symbols, he said, are three words and concepts used to describe Jesus Christ: Savior, redeemer and rescuer.

Spong's contention is that the story of "The Fall" into "Original Sin" is misguided and must be set aside.

When we stick with The Fall and Original Sin, he says, it means we need "divine rescue." And, he said, "it was in the category of divine rescue that we told the Jesus story." Thus we get what he called the "mantra" that "Jesus died for my sins."

What Spong wants to do is to reset the Jesus story in a way that shows us how Jesus was helping us "to become more deeply and fully human."

So, he said, "maybe we should stop calling Jesus by these discredited titles. Suppose we begin to think of the Christ figure as the call to a deeper and fuller humanity. . .That's the power that I now see and experience in Jesus of Nazareth."

Spong was careful not to suggest that setting aside the doctrine of "Original Sin" means "denying the possibility of human evil."

But, he said, "I locate evil not in some mythological fall that has wrecked our potential perfection but simply as part of the evolutionary baggage that every one of us carries," meaning we will do almost anything to survive, even destroy others.

Well, you can see how Spong is happy to whipsaw traditional Christians this way and that as he challenges them this way and affirms them that way.

Is Jack Spong a heretic? Some would say so and I can understand why. But if he's a heretic (one of those circle-the-wagons concepts), I think the church needs such heretics to cause us to be what we in the Presbyterian tradition call "the church reformed and always reforming." I need not agree with Spong to learn from him and I need not condemn him to affirm my own more traditional Christian positions.

But I can at least appreciate his own humanity, such as his humility and humor revealed when he told us that after a sermon he once gave someone leaving the church said this to him: "Every one of your sermons is better than the next."

Archeologists digging in the historic village of Jamestown in Virginia have turned up what they believe are the oldest remains of a Protestant church in what is now the U.S. No, the first clue wasn't all the leftover casserole dishes.