Buried deep within the new information in the latest Richard M. Nixon tapes released last week was something about faith that fascinated me. 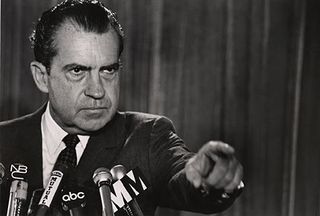 As The Washington Post reported it, one recording contained "his dictated musings about an odd episode from 1970, when he paid a late-night visit to the Lincoln Memorial to meet anti-war protesters. He told the young people they were hungering for the same things he searched for 40 years earlier.

"Ending the Vietnam War and stopping pollution won’t end 'the spiritual hunger which all of us have,' he dictated. That, he said, is the 'great mystery of life from the beginning of time.'”

So here is this complex, Quaker-born, down-and-dirty president (pictured here) acknowledging a reality all of us know we have -- a spiritual hunger. And this hunger, in Nixon's words, constitutes a "great mystery" that is unending.

Reading that, I was reminded of a conversation I once had with former Nixon aide Chuck Colson. In a visit Colson made to Kansas City (it must have been the early 1980s), I drove Colson around to a speaking venue or two so he could talk about Prison Fellowship, the ministry he started after he was released from prison for his part in the Watergate scandal.

I asked Colson if he had had any recent contact with Nixon, and Colson indicated that Nixon no longer was interested in taking his calls or responding to his mailed notes. This seemed to distress Colson, so I asked why he wanted contact with the disgraced former president.

Colson told me that he believed Nixon was spiritually hungry and that he, Colson, wanted a chance to share the Christian gospel with him while also apologizing for any damage Colson had done to Nixon in the Watergate scandal. What I said next seemed a bit far-fetched to me even at the time, frankly, but I asked Colson if he'd mind if I wrote to Nixon and told him that Colson really wanted a chance to talk with him.

Colson said he'd be fine with me doing that. So I wrote to Nixon telling him, without great detail, that Colson was anxious to talk with him. Eventually I received a note from Nixon saying thanks for my note and that he was glad to have the benefit of my thinking. It was a standard form boiler-plate reply that made no mention of the contents of my note.

And to this day I have no idea whether Colson ever got a chance to speak again with Nixon about what, while Nixon was president, we now know he recognized as everyone's spiritual hunger.

HOW WOULD GOD VOTE?

Herman Cain says God told him to run for president. I'm not sure why (well, if) God is doing this, but 2012 will be the 12th time I've voted for president and so far God has never told me for whom to vote.

The Accidental Revolutionary: George Whitefield and the Creation of America, by Jerome Dean Mahaffey. If Americans know anything about George Whitefield, it's that he was a fiery preacher along with Jonathan Edwards in the Great Awakening of the mid-1700s. What the author of this intriguing new book suggests is that there's something much more important to know: Without Whitefield there would have been no American Revolution. Mahaffey, who teaches communications at Indiana University East, puts it this way: ". . .of all the colonial leaders and their ideas, if you remove Whitefield and his contribution, no one else had the message, popularity, and influence to shape American colonists into people who could declare independence. Indeed, I believe Whitefield converted the colonies not just to Christianity. In a larger sense, his ideas converted the colonies into a unified America from the diverse ethnic and religious-based communities all over the eastern seaboard." But Mahaffey argues that Whitefield, who honed his rhetorical and theological skills in his native England, did not realize that his message of liberty would lead to a separation between the colonies and England, thus the "Accidental" in the title. It may be difficult to imagine how Whitefield became so wildly popular in a culture without radio, TV, the Internet or social media tools, but, Mahaffey says, "he was truly the world's first international pop idol." Using that popularity, Whitefield's work led people to understand that the colonial conflict with was "a millennial struggle between good and evil, with the stakes being slavery or freedom." More proof that if you change minds you change history.