But we usually don't think of prayer when it comes to getting exposed to other paths. And yet that is what people who have attended the annual Table of Faiths luncheon in Kansas City for the last seven years -- including this past Thursday -- have been able to experience. 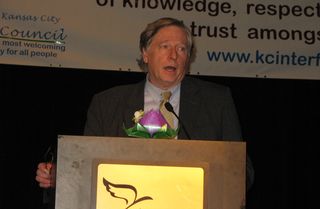 Before the meal, members (pictured above) of more than a dozen different religious traditions offered a prayer. I missed taping the Native American and Baha'i representatives, but I taped the rest and offer that to you today for several reasons.

The first one is by my friend Lama Chuck Stanford, a Buddhist, who once told a gathering at which he was asked to pray that Buddhists don't pray, but nonetheless then and again Thursday he offered the closest equivalent to a Buddhist prayer. To listen to those prayers, click on this link:  Download Interfaith-prayers

I hope you will notice two things about these prayers: First is their uniqueness and the way in which they reflect the special characteristics and quality of each tradition. Second is how much common ground they share. In the end, people of faith pray from almost all traditions pray for peace and blessings and pray to say thanks.

One of the award winners at Thursday's luncheon was the Kansas City Public Library. It was accepted by the library's executive director, R. Crosby Kemper III, pictured on the right. The other award recipient was Donna Ziegenhorn, author of the play, "The Hindu and the Cowboy."

Rich Cizik is one of the wisest, most thoughtful Christian evangelicals out there, and he has nailed it with this great piece about the need for a serious discussion about values that find their root in the Christian gospel. As he writes in this Washingto Post piece, "The 'compassionate conservatism' espoused by President George W. Bush and many prominent evangelical leaders has been supplanted by a Tea Party ideology that bears more resemblance to the anti-Christian philosophy of Ayn Rand than it does to the Gospel." And he concludes, "This might be good politics, but it’s bad theology." Indeed. (Cizik leads the New Evangelical Partnership for the Common Good.)