One of the sad realities of much of the religious world is that people of faith many times think that they must criticize other religions as a way of making their religion appear right and good. 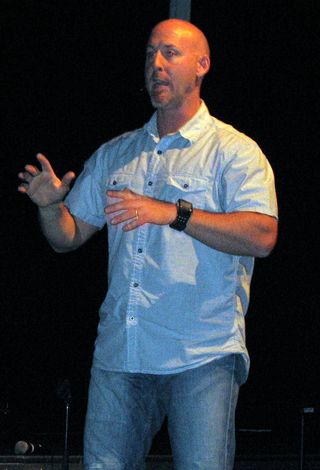 Quite often this happens almost without the perpetrators knowing they're doing it.

I suppose there are countless examples of overt criticism, such as when certain Christians describe Islam as the religion of the devil. This kind of in-your-face style of insult used to be found a lot in the way Christians spoke about Judaism. (For my essay on anti-Judaism in Christian history, look under the "Check this out" headline on the right side of this page.)

Today the Christian critique of Judaism tends to be much more subtle, though, to be sure, it's still there and still as completely unnecessary as ever as a way of raising up what is beautiful about Christianity.

I heard an example of this kind of subtle put-down the other evening at the opening night of what was called the Sentralized Conference, held at Heartland Community Church in Olathe and focused on how Christians today are to be sent into the world to alert people to the reign of God announced by Jesus Christ. (Indeed, as several speakers made clear, that is the primary mission of the church. And they're right about that.)

But the speaker to whom I refer (and he had many interesting, valid and good things to say) was Hugh Halter (pictured here), an author and national director of Missio, a ministry that seeks to develop church leaders.

Halter was speaking about incarnation and the Christian belief that Jesus was God incarnate. Then, speaking of the ministry and message of Jesus, Halter said this:

"Everything about what he did -- from saying no more temple worship, no more priests, the law of Moses is going to be obsolete, everything you thought it was to be a God person -- he starts to upturn everything."

What is the not-so-subtle message here? Pauline scholar Mark D. Nanos puts that distressing message this way: That for there to be something right with Christianity there obviously must be something wrong with Judaism. (Never mind that Jesus didn't ever exactly say that there would be no more temple worship and no more priests and that the law of Moses will be obsolete; indeed, Jesus said he came to change not a jot or tittle of that law but to fulfill it. That, however, is a complicated subject for another day.)

My point is that it should be possible -- indeed, I would argue, it is necessary -- for Christians to point to the gospel of Jesus, the message of the in-breaking reign of God, without having to trash the faith of others, particularly since Judaism itself has survived (against astonishing odds, almost no thanks to Christianity) since Jesus' time and continues to be a valuable and valued tradition.

Later, after some good insights about how Christians can help introduce people to Jesus, Halter drifted into a familiar ditch -- by using the Pharisees of Jesus' time as a foil. Clearly Jesus criticized the Pharisees in the New Testament, but that was an internal Jewish dispute and we need to be careful about dragging that into today's context without doing a lot of explanation. When Christians casually pick up that battle today it can't help but be seen, however unintended, as anti-Jewish.

"The definition of a Pharisee," Halter said, "is actually somebody who knows a lot of scripture but separates from the world, which is most pastors that I've met. So tweet that: 'Halter just called 500 pastors Pharisees.' I do. I think that you're Pharisees. I've become one. I think I'm recovering but I spent my whole life studying. . ."

And when Christians hear that today, theyalmost inevitably  first hear "Pharisee" as "Jew," (no matter if Halter then applies the label to pastors) and Christians in the pews rarely have the historical understanding to keep the story in a First Century Jewish context. Rather, they are led to think, "Pharisee equals Jew equals bad."

Halter later went into a criticism of the Sabbath rules of the First Century, and I heard it as a way of saying that Judaism was mostly interested in rules and regulations, not in the spirit of life and love. And in the minds of hearers the "was" in the previous sentence gets unconsciously changed to "is."

As the New Testament scholar from Vanderbilt University, Amy-Jill Levine, reminds us in her indispensible book The Misunderstood Jew, the Pharisees in the First Century were the ones who took faith seriously: "Although a bit generous as an analogy, the Pharisees would be the equivalent of Mother Teresa or Billy Graham." Nevertheless, she writes, today "Christian readers (of the gospels) usually presume Pharisaic evil."

Why? Because Christian leaders and pastors presume it and teach it and what it amounts to, at base, is anti-Judaism, and it's absolutely unnecessary to the proclamation of the Christian gospel.

When Levine writes about a passage in the gospel of Luke, she notes this: "By Luke's time, the Pharisees had come to represent for the church the Jews who refused to follow Jesus; their portrait is primarily composed of polemic, not objectivity." (Too bad lots of seminarians and Bible college students don't learn that.)

Christianity is beautiful not because of what it is against but because of what it is for -- love and mercy and grace and justice and peace and redemption and generosity and compassion and on an on.  I wish more Christian leaders would remember that, would be trained not to engage in subtle anti-Judaism or Islamophobia, would understand that Christianity is strong enough to stand on its own without having to be defined as not-this or not-that.

Why is that so hard?

A BIT OF CATHOLIC vs CATHOLIC TALK

A Catholic columnist, Maureen Dowd of The New York Times, has taken on Catholic members of the U.S. Supreme Court, particularly Justice Scalia. I love living in a country in which this kind of intrafaith dialogue can be public and can cause the rest of us to think.