This past Friday evening I spoke at the Shabbat service of Temple Israel of Greater Kansas City at the request of Rabbi Jacques Cukierkorn. 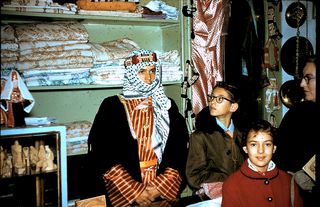 Jacques and I, along with Fr. Gar Demo, the priest at St. Thomas the Apostle Episcopal Church in Overland Park, will be leading a Jewish-Christian study trip to Israel in April. So he asked Gar and me to talk about why Israel is important to us as Christians.

Because I think that's an important question whether you plan to go on our trip or not (and I hope you do), I want to share with you today what I told Jacques' congregation.

(The photo here today? It shows me as a kid in a shop in Jerusalem. That's my youngest sister, Mary, and my mother with me.)

It may be a surprise to some folks, but words carry meaning. So when you call the pope a Nazi, as actress Susan Sarandon did recently, someone is likely to pay attention and denounce this for what it is -- destructive prejudice and nonsense. People of faith know perhaps more than anyone else how much words matter. It's why we take the words of our sacred writ so seriously while at the same time seeking to avoid worshipping the words themselves.