A few weeks ago here on the blog I took note of the recent publication of a new translation of the Bible called the Common English Bible. 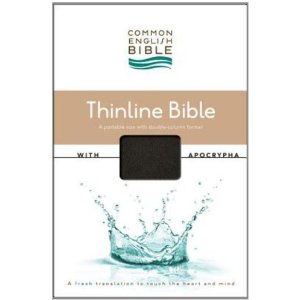 But I had not yet had a chance to do much reading in it when I wrote that. Now that I have the Bible I want to tell you that I'm quite impressed with its ability to be faithful to the Greek (New Testament) and Hebrew (Hebrew Scriptures, which Christians have long called the Old Testament) while still rendering the words into English that can be easily understood by people living 400 years after the publication of the King James Version of the Bible. The edition I have contains the Apocrypha, those books that are considered non-canonical by most Protestant denominations but that are used by Anglican, Catholic and Orthodox adherents.

But what I find most remarkable about this and other recent translations is the evidence it gives to how seriously people still take the Bible.

No book (the Bible is actually a collection of books) in history has been so meticulously studied and loved. No book has been more important in faith formation, though some, such as the Upanishad of Hinduism, are older, and some, such as the Qur'an of Islam, are more often entirely committed to memory. And no book has had more translating committees arguing over the meaning of more words and phrases.

The preface to the CEB is fascinating as much for a listing of the translation issues and decisions the translators faced as for specifics of how they went about resolving them. And there always are translation issues and decisions, including choosing which original Hebrew or Greek text will be used or consulted when seeking to render Hebrew and Greek (and a little Aramaic) into English.

There is, for instance, a section in the preface that lays out the case for the translators choosing, in many cases, to refer to Jesus as "the Human One" instead of "the Son of Man," a term commonly used in many previous translations.

And there is an explanation of why translators choose to change other common wordings to something that readers today can grasp, such as abandoning the wording "Lord of hosts" and using, instead, this phrase: "Lord of heavenly forces." (After all, Lord of hosts sounds a little like the person in a restaurant who hires and oversees the people who greet you when you enter.)

The translation was sponsored by a committee of Mainline Protestant publishers: Presbyterian (PCUSA), Episcopalian, United Methodist, Disciples of Christ and United Church of Christ. But the translators represented 24 separate bodies, including Catholics, Mennonites, Seventh-day Adventists and Reform Jews.

I haven't read every word of the new Bible yet but I like what I'm seeing. Well, except that a favorite passage of mine from Micah (6:8) gets stunted, I think. The part that the English Standard Version renders this way: "He has told you, O man, what is good; and what does the LORD require of you but to do justice, and to love kindness, and to walk humbly with your God?" the CEB has: "He has told you, human one, what is good and what the Lord requires from you: to do justice, embrace faithful love, and walk humbly with your God."

Somehow "embrace faithful love" strikes me as mushier than "to love kindness" and seems less rhythmic. But maybe I'll get used to it on repeated readings.

My hope is that many Protestant churches that now used the New Revised Standard Version, including my own, will eventually move to the CEB.

The recent news about an inner-Amish fight in Ohio has raised questions about how people view this religious group (groups, really; the Amish are not monolithic). And an Ohio English professor who has studied and written about the Amish has offered all of us help with this essay. The lesson here -- once more -- is that labels hide more than they reveal, even labels applied by groups to themselves.