One of the worries for Muslims in America has been how to negotiate their way into being an accepted part of the culture. 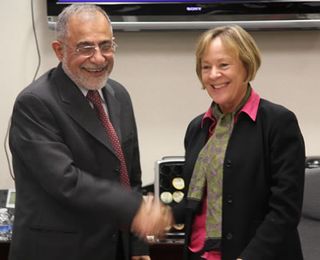 Certainly other minority groups have struggled with this same issue over the centuries and have found various ways to maintain their identity while becoming an accepted and welcome part of society.

But with religion it's a bit different -- especially if your religion has been blamed for encouraging the kind of terrorism that walloped the U.S. on 9/11.

Muslim leaders have found that they need all the help and training they can get to guide their people toward societal acceptance.

And now a major American seminary is stepping in to help.

If any American seminary were to do this, Hartford is the most logical. It has offered education in Islam and in Christian-Muslim relations for a century.  And in the last decade it has introduced other programs related to Islam.

There are some Christian seminaries in the U.S. that wouldn't be caught dead doing this. Instead, they spend time training their students in ways to convert Muslims to Christianity and, in some cases, they spend energy denouncing Islam. (On the other hand, some Muslim leaders want little or nothing to do with non-Muslims and they, too, are part of the problem.)

But to live in a truly pluralistic religious landscape, as we do, it's important for the leaders of all faith communities to be able to communicate with and respect other groups. The Hartford program should help with that and benefit not just Muslims but everyone. So good for Hartford.

THE ROLE OF FAITH IN THE OCCUPY WALL STREET MOVEMENT

The other day here on the blog I took note of some Christians getting engaged in the "Occupy Wall Street" movement. That phenomenon has sparked this interesting discussion about the role of people of faith in this movement -- and especially the question of whether the Occupy Wall Street movement has the potential to morph into a mega-church movement for people who identify themselves as politically or theologically liberal or progressive. Much about this matter still is unclear, not unlike some of the desires of the people protesting. But it's a fascinating development to watch and has the potential to become a major movement in religious circles.

P.S.: Don't miss what promises to be a fabulous musical presentation this Sunday, Oct. 23, and again a week from Sunday, Oct. 30, "Lament for Jerusalem: A Mystical Love Song," a new coral/orchestra work by John Tavener. The Oct. 23 performance will be at 5 p.m. at Village Presbyterian Church, 6641 Mission Road, Prairie Village, while the Oct. 30 performance will be at 2 p.m. at Our Lady of Perpetual Help--Redemptorist Catholic Church, 3333 Broadway in Kansas City. The music will be performed by the Village Church Choir and Orchestra along with the William Jewell College Concert Choir. There's no charge, but donations will go to benefit the Kansas City Interfaith Youth Alliance.