Many Americans, wallowing in what sometimes is self-inflicted ignorance that leads to fear, are scared half to death of the Shari'a, usually translated (somewhat misleadingly) as Islamic Law. (A literal translation of Shari'a would be "straight path.") 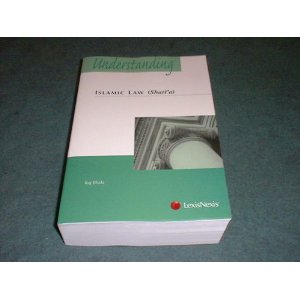 So they try to pass (and in some places succeed in passing) state laws forbidding judges from in any way drawing on Shari'a in their rulings. (More about why that's both silly and counterproductive in Monday's posting here.)

Surely it's time for a great book to help people understand what Shari'a is and what it isn't. Well, such a book is here. It's called Understanding Islamic Law (Shari'a), by Raj Bhala, a non-Muslim (he's Catholic) Harvard law graduate who teaches law at the University of Kansas and who has a deserved international reputation for his valued work in international trade law.

To say the book is simply amazing is to understate the case. I suppose any book that runs about 1,500 pages should be amazing. But beyond its size, it is the first book about Islamic Law written in English by a non-Muslim. It compares Islamic law to American law and, for an interesting twist, also to Catholic canon law.

The problem (well, sort of a problem) is that it was written for law students and not for the general public, though I found that a great deal of it -- especially the early history of the Prophet Muhammad, the beginnings of Islam, the story of the Qur'an and other subjects -- quite accessible. Law students in many parts of the world, including America, today study Shari'a as part of their regular coursework, at least partly on the theory that you can't understand your own legal system unless you compare it with a different one. Besides, in the globalized economy, lawyers for many businesses wind up needing to know the Shari'a.

Bhala agrees that a book about Shari'a written for a general, non-Muslim English-speaking audience is needed. It's just that, as far as he knows, no one right now is writing one, including him.

When I said earlier that translating Shari'a as "Islamic Law" is misleading, I was referring to the early section of Bhala's book in which he notes that such a translation "is not wrong. But, from an American legal mindset, it is incomplete in two respects." First, the term law itself seems limiting when it comes to Shari'a, for, "the Shari'a occupies a much more prestigious place in the minds of Muslims than does American law in the minds of Americans."

Second, it is misleading to think of "law" as it applies to Shari'a as a system of rules enforced by the state. Shari'a, in fact, is drawn from the Qur'an and the Hadith (sayings by and stories about the deeds of Muhammad and his companions) and is designed to govern all aspects of a Muslim's life. In many ways it is both the individual Muslim and the larger Muslim community who serve as the system of accountability for how well one is doing with that. Another way to think of Shari'a is as the path Muslims must walk to be in a healthy relationship with God.

It might be fair to say then, that the Shari'a is not simply an Islamic version of the Ten Commandments but, rather, more like a hugely expanded version of the Beatitudes that Jesus gave as a guide.

For this review of Bhala's book, I'm not going to go through every aspect of this monumental work. I just want you to know that if you have questions about Shari'a and want to get information about it that is clear and not the kind of poppycock you're likely to hear from certain talk show hosts or radio preachers, this is the book to consult.

I was especially impressed by the thoroughness with which Bhala dealt with topics that are controversial within the Islamic world. For instance, there's a verse in the Qur'an (4:34) that traditionally has been translated in a way that seems to allow husbands -- after exhausting all other remedies -- to beat their wives. As such, it seems oddly out of sync with the tone of the rest of the Qur'an, and especially with the way Muhammad himself lived his life.

But a 2007 translation of the Qur'an by Laleh Bakhtiar, called The Sublime Qur'an, makes a persuasive case that the word translated as "hit" or "beat" doesn't mean that at all but, rather, is an admonition to frustrated husbands simply to "go away" from their wives. Bhala spends considerable time unpacking all of this and sheds useful light on the subject.

Well, this weekend posting has grown too long to share with you highlights of a conversation I had with Bhala a few days ago about his work. I'll do that here in Monday's post. So come back then and read, among other things, why he thinks it's not Shari'a that should concern non-Muslim Americans but, rather, "the inauthentic doctrines of the Shari'a that are wrongly promulgated by violent extremists."

WILL THEY 'RUE' THE DAY? (that's a French joke)

Speaking of fear of Muslims, it's now illegal to pray in the streets of Paris. Really. Well, you surely wouldn't want to offend the tender eyes and ears of secular humanists there, would you? Besides, Jesus, whom Muslims revere as a prophet, said that you should closet yourself away when you pray. Must be some French legislators have heard of Jesus.