Last week I had the privilege of hearing Yale theologian Miroslav Volf (pictured here) when he spoke at Central Baptist Theological Seminary in suburban Kansas City, and today I want to unpack something he said -- something I did not get a chance to ask him about directly. 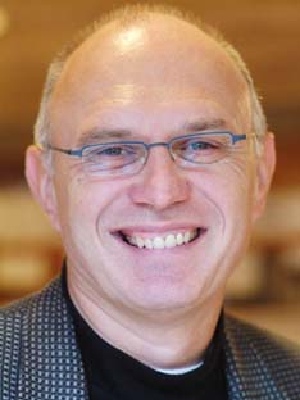 Maybe you have some thoughts about this and would e-mail them to me.

Volf was bemoaning the human tendency to make God what he called our "divine butler," contrasting that with what the great 20th Century theologian Karl Barth one said, which is that "God does not serve."

Volf called the habit of trying to make God our personal servant "one of our most nefarious propensities in regard to God. . .The image that emerges is God as divine butler." When we need God, we ring the bell and make our wishes known. Then we send God back to the waiting place until we need something again.

I think most of us can relate to this notion and probably are guilty of it ourselves. This approach differs from understanding God as a constant and loving presence in our lives, one who wants the best for us at all times and calls us to repent and be transformed, but still a God of infinite mystery.

And yet it seems to me that at least in Christian understanding there is something misleading about Barth's simple assertion that "God does not serve."

For how does the Christian story say God entered the world? In weakness. As a servant. And Jesus told his followers to be servants, for that is what a true leader is.

So what I wanted to ask Volf is how he would juxtapose those not-a-servant, yes-a-servant ideas. If God chose to become a servant, then are we wrong to think of God as a servant? And yet if God asks us to be servants, can we possibly think that the one able to call us to that is a servant?

More disturbing news about religion in America: We seem to be heading toward a time when 310 million Americans worship 310 million different Gods. That's pollster George Barna's assessment of new research findings he's just released. These findings are in harmony with the concern New York Times columnist David Brooks raised this week about moral individualism. The old "if it feels right, do it" ethic seems to have spread like crazy. How odd in a country in which so many people claim to be Christian, a faith that upholds the value of each individual, for sure, but that is really about community and shared values. One is almost forced to conclude that lots of people who say they are Christian don't understand Christianity.