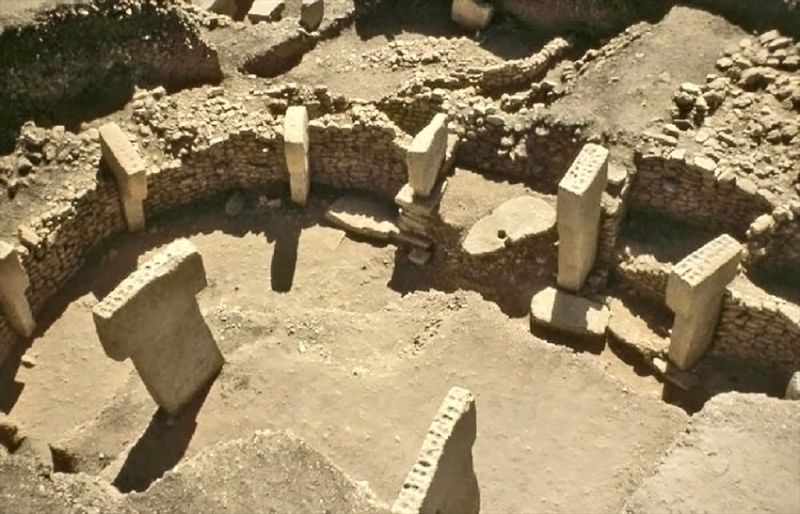 I was sitting in a doctor's office the other morning when I had two surprises: 1. There was a relatively up-to-date magazine available. 2. It contained an intriguing story worth passing along to you. Better yet, the story is available online and I just linked you to it.

The June issue of National Geographic has a cover story about the birth of religion. It's focuses on a phenomenal sacred structure (not unlike Stonehenge) in what today is Turkey. The structure is called Göbekli Tepe (pronounced Guh-behk-LEE TEH-peh) (pictured here), now being unearthed, and it has given rise to new thinking about the origin of religion. (I found the picture here today at http://bit.ly/lEkQV8.) The story says, in part:

The construction of a massive temple by a group of foragers is evidence that organized religion could have come before the rise of agriculture and other aspects of civilization. It suggests that the human impulse to gather for sacred rituals arose as humans shifted from seeing themselves as part of the natural world to seeking mastery over it.

In this piece, as in much writing about religion by people whose training is in science, the unstated assumption is that religion is inevitably somehow a creation of humanity. By contrast, people of faith would much more often describe religion as simply humanity's response to an experience of the divine or to direct divine revelation.

As my friend Vern Barnet likes to say, religion finds its roots in awe and wonder, and that's certainly true. But is religion simply a made-up response to the awe one feels looking at the creation or is there some foundational truth or truths that call forth the religious response? It's too simple to put it this way, but often science would say it's the first while people of faith would say it's the latter.

Whatever its origin, religion is here to stay. The job of people of faith is to make sure it's a force for good in the world, not (as it's often been) a force for evil.

I'd like to think it was the power of the press, but I know better. Yesterday I wrote about the continuing questions of what Pope Pius XII did about saving Jews in the Holocaust. Later that same day I found this story saying the Vatican plans an exhibit of some of its "Secret Archives," including some previously unreleased documents relating to Pius and World War II. In any case, this seems like a step in the proper direction.

Blessed Are the Peacemakers, by Daniel L. Buttry. Oh, of course, you've heard of Martin Luther King Jr. and Mahatma Gandhi. And Buttry, global consultant for peace and justice for the International Ministries of the American Baptist Churches, doesn't ignore them in this collection of peacemaker biographies. But he goes much deeper, giving readers dozens and dozens of sketches of inspiring people of whom most of us have never heard. Do you know anything about Bolivian women hunger strikers Nellie Paniagua, Angelica Flores, Aurora Lora and Luzmila Pimentel? You'll learn about them here. And inevitably you will ask yourself what you and your own faith community are doing to respond to hunger. And do you remember Carl Upchurch, who helped put together the national gang summit in Kansas City in 1993, with help from my late friend, the Rev. Steve Baston? Upchurch's story is in here, too. This is a great book for faith community study groups who are interested in what can be done today to promote peace. There are lots of models here, each one able to teach people something different. Buttry doesn't write about peace from strictly a historical or academic stance. He gets his hands dirty with this work. For instance, he and his wife, the Rev. Sharon A. Buttry, recently returned from a peacemaking  trip to Kenya that began with a student at Central Baptist Theological Seminary in the Kansas City area. The Buttrys joined Prof. Terry Rosell (and the whole Rosell family) to work to resolve tribal conflicts in the Molo District of Kenya.