A bit over a month ago here on the blog, I reviewed Deborah E. Lipstadt's important new book, The Eichmann Trial, about the court case 50 years ago that convicted one of Hitler's chief operating officers in the Holocaust. 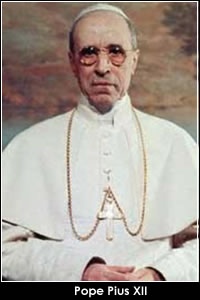 When she was in Kansas City last week, I had the opportunity to hear her speak at the Plaza branch of the Kansas City Public Library. She gave an excellent summary of the high points of the book. (And, by the way, thank goodness for Crosby Kemper and all of his library staff. They offer some excellent free events to the public. Several hundred people showed up to hear Lipstadt.)

When she was done, Lipstadt took a few questions, and somehow I managed to ask the first one. I thought her response was interesting so I'm going to offer it to you here today.

Me to Lipstadt: You mentioned early in your talk a little about the Vatican. And I gathered from reading your book and elsewhere that you're convinced that the Vatican in World War II really did not step up to the plate and do what it needed to do (as regards the Holocaust). And I wonder if you'd unpack that a little bit for us. . .because there's a lot of controversy still about that matter.

Lipstadt: The Vatican certainly did help war criminals escape from Europe. I don't think they were helping them because they were war criminals. I'm not suggesting that. But they were people who needed to be helped to escape, just like some priests and some Vatican officials helped Jews, so they helped these people as well. Pope Pius XII's calculation was, "If I speak out, we are under threat. The Nazis can come rolling right into Vatican City and take it over." And he may have quietly supported some Catholic officials who were doing (good) things. And there were some priests, such as the previous pope, John Paul II, certainly, who was a young priest then and was involved with other priests who helped Jews. There were many priests who did. But the Vatican hierarchy really did not. We don't know the whole story. To this day the Vatican refuses to open the archives and let that information out. But it's certainly not the Vatican's most shining moment. But there are those who say, "Well, you know, Pope Pius had to make a political calculation of what was best for the Vatican." And Hannah Arendt says that when the place in the world that most claims for itself an ethical and moral voice is making its judgments based on stratetic decisions as to what is its future, something really has been compromised.

From the reading I've done, I think, as Lipstadt noted, that we simply don't know the whole story. There are credible claims that Pope Pius XII made several important decisions that helped Jews survive. And there are those who claim (I think this claim is wildly far-fetched) that Pius was "Hitler's pope." But if it's true that we don't yet know the whole story, I think Lipstadt is premature to says that "the Vatical hierarchy really did not" help Jews much. It's quite possible -- maybe even probable -- that her statement is true. But we just don't know. And as long as the Vatican declines to make its archives on this matter fully transparent, the controversy will continue.

Salon has published this engaging piece by a gay Presbyterian pastor and his experience of being hated by residents of Henderson, N.C. Anyone who has read my words in the last several decades knows that I favor ordination of otherwise-qualified gays and lesbians -- and that now is possible in my denomination, the Presbyterian Church (USA), as of this month. For my reasons, see my essay on the Bible and homosexuality under the "Check this out" headline on the right side of this page. In essence, this battle is over. People on the wrong side of history -- and the wrong side of the Bible -- may still kick and scream, but they have lost. Thank God.