As some of you know, I lived in India for two years of my boyhood. And although even then the caste system was officially banned, it was clear that it was used it many ways. 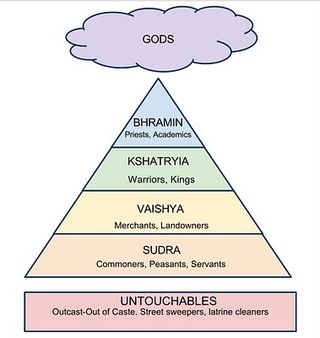 This was particularly distressing for a young American boy who had grown up with the idea that all people are created not just equal in value but also children of God. I had trouble understanding what it could mean to be an "untouchable."

It's now been nearly 65 years since India achieved independence from Great Britain, but the caste system remains a bone of contention.

Just recently, in fact, the Hindu American Foundation issued this report damning the caste system's continued use and insisting that it violates the foundational beliefs of Hinduism.

You can read the whole report at the Web site to which I've linked you, but here, in words taken from that Web site, are the six basic themes the report seeks to advocate:

It also turns out that my best friend in India, Markandey Katju, who serves on the country's Supreme Court, has written this piece about the caste system (making some of the same points as the HAF makes). I just happened to find Markandey's piece as I was looking at this HAF report. It's worth a read.

In some ways this is an internal Hindu/India controversy. But, of course, it has far-reaching implications, including, as Markandey and HAF both note, in Indian politics, which ultimately affects the whole world. In that way, it's not unlike the internal Islamic debate over whether terrorism is a justified tool, though in that debate the ripple effects are much greater and more costly.

(By the way, the illustration here today shows "gods" at the top. And although Hinduism is widely considered a polytheistic religion, it's really monotheistic. But that's a subject for another day.)

THE VATICAN RESPONDS TO IRISH PAIN

Ireland's prime minister has stood up for children abused by priests in the Catholic Church there, and in response the Vatican has recalled its papal nuncio for consultations. It's the right move by Pope Benedict XVI, indicating a lack of confidence that the nuncio has handled things well there. But, of course, none of this makes whole the children who have been damaged.