One of my sisters is good friends with the author Carolyn North, whose writings I have enjoyed over the years. 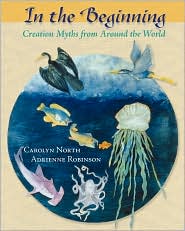 But I hadn't seen Carolyn's 2009 book, In the Beginning: Creation Myths from Around the World, until my sister sent it to me the other day. It's quite attractive, with art work by Adrienne Robinson. In it, North looks at creation-of-the-world stories from more than a dozen traditions, re-telling those stories in her own engaging words.

Now, people who want to insist on a literal reading of Genesis (there are two creation stories in the first book of the Bible) may not be pleased with the liberties North has taken in her reshaping of the stories from this tradition, but I found that it opened up the story of creation in fresh ways.

You can get the book and read and review it for yourself. I want to use the gift of it to me to remind both you and me that almost every culture has imagined some kind of creation story. What's surprising is both how much they are alike but also how different they are.

As I say, North's book renders more than a dozen of these stories, but there are many more. To sample some of them, click here.

Some people object to the use of the term myth to describe creation stories, assuming that myths aren't true. Well, myths can carry lots of truths even if they can't be verified as historical events. And because no human being was around to witness the creation and record all of its aspects, creation stories necessarily are myths.

But they tell us something important about the human condition. They tell us that we are seekers, never quite satisfied with current theories of how we got here. Having restless hearts is a good thing. Such a condition makes us explorers at heart. And it's this desire to find ourselves, our home, our beginning and, finally, our future, our destiny, that drives us. That's precisely the drive to which religion seeks to respond.

It is now the task of those of us who are Christian to do what many people demand of Muslims after acts of terrorism done in the name of Islam -- denounce acts of terrorism performed in the name of religion. The long manifesto written by the man accused of murdering all those people in Norway says the acts were done as a call to start a Christian war against Islam in Europe. So let me say that in his manifesto, Anders Behring Breivik, the suspect, does not speak for Christians and has acted wildly outside the bounds of what Christianity allows and teaches. His actions are an outrage to all religion and to Christianity in particular. No sincere follower of Jesus would have done such heinous acts and if Breivik is found guilty he should be punished to the full extent of the law. The World Evangelical Alliance has spoken out in a similar manner.