At first this seems counterintuitive: 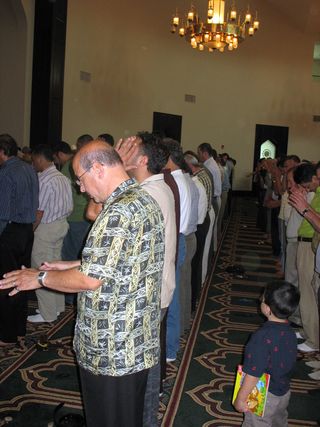 A new Ohio State University survey has found that more (not fewer) Americans feel threatened by Muslims in the U.S. after the death of Osama bin Laden than before Navy SEALS killed him in Pakistan.

As the press release describing the survey's finding notes, ". . .in the weeks before bin Laden’s death, nearly half of respondents described Muslim Americans as 'trustworthy' and 'peaceful.'  But only one-third of Americans agreed with these positive terms after the killing."

First, we have to acknowledge the sad truth that many Americans know little or nothing about Islam, and that what they think they know often turns out not to be true. Survey after survey reveals this. (And Americans' ignorance about religion extends far beyond Islam, as I noted in this recent blog posting).

Next, we're moving closer to the 10th anniversary of the 9/11 terrorist attacks, and there's increasing media coverage of not just that murderous day but also what's happened between then and now. No doubt this renewed focus on terrorism plays into American fears (some of which are justified).

Erik Nisbet, assistant professor of communication at Ohio State and one of the survey leaders, is quoted in the press release as saying much the same thing about the bin Laden death itself: “The death of bin Laden was a focusing event. There was a lot of news coverage and a lot of discussion about Islam and Muslims and Muslim Americans.”

But beyond that, Americans continue to hear bigoted views about Islam from many sources, including hate-mongering from radio talk show hosts and fear tactics from such politicians as Herman Cain, a GOP presidential hopeful who recently said Americans should have the right to ban mosques in their communities. (So much for the Constitution.)

Combine all that with the ridiculous controversy over a proposed Islamic center near Ground Zero and with a quite natural fear that al-Qaida will try to do what it can to take revenge on the U.S. for killing its leader and the findings of this survey aren't surprising or counterintuitive at all.

They're sad. That's for sure. And Muslims, interfaith leaders, politicians and others must do what they can to reverse this trend toward fear of American Muslims. But given all these other realities, the survey results should have been expected. (For the full survey report, click here.)

(The photo here today is one I took a few years ago at the Islamic Center of America in Dearborn, Mich., at Friday prayers.)

AND A MUSLIM REALITY SHOW, TOO

Speaking of Muslims, the TLC cable channel this fall will start airing a reality show about the lives of Muslim families in Dearborn. Sometimes I'm reluctant to admit it, but it's often shows like this that can break down prejudices and educate people in ways that simply aren't possible through lectures and other more formal avenues. Hope this one does that.