DETROIT -- Those of you who have read my latest book, They Were Just People: Stories of Rescue in Poland During the Holocaust, may remember the Holocaust survivor whose story my co-author and I tell first, Zygie Allweiss (pictured here). 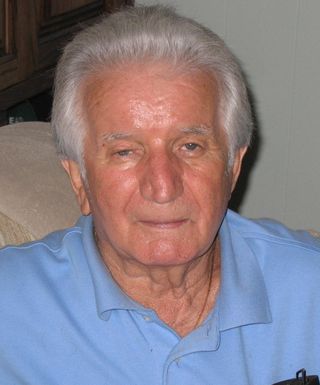 Zygie, who turned 84 on May 8 (Harry Truman's birthday and the day that marked the end of World War II in Europe) lives here in suburban Detroit with his wife, Irma. Zygie's and Irma's daughter, Esther, and her husband Mike, picked me up at my downtown hotel and brought me out to the Allweiss home for a brief visit.

I really like Zygie. He's a tough, no-nonsense guy with a great, dry sense of humor. What he went through in World War II just to survive is simply breath-taking, but you already know that if you've read my book.

When I arrived, Zygie wanted to show me the wall hanging he now has that shows two photos of the Polish couple who hid him and his brother and, thus, saved their lives, Maciej and Zofia Dudzik. (They're pictured below, first in a pre-World War II picture, then one well after the war.)

He expects that a similar hanging soon will be installed at the Holocaust Memorial Center in suburban Detroit. "You've got to honor them," Zygie told me. 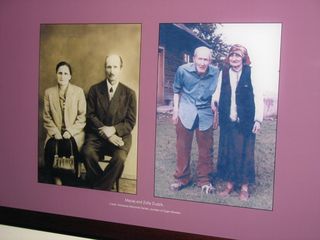 Zygie has had some health issues since he came with his daughter Esther to Kansas City in September 2009 to help us launch the book. So today he uses a walker, but it hasn't dampened his spirit for life and for wanting to understand the world.

Indeed, he spoke to me about Israel, about nuclear war threats, about interfaith understanding and much more in our brief time together.

Maybe because of the astonishment of having survived at all when most Jews in Europe were murdered at the hands of the Nazi-led Germans, Zygie goes for the big picture.

Wow, I told him, "there's a small question." I did my best to give him a sensible answer, though I'm not sure it was particularly edifying.

But this experience was a good reminder to me of all the fascinating people I've had an opportunity to meet and learn from in my life -- from living for two years of my boyhood in India to a career in journalism that has put me in touch with all kinds of amazing folks.

What is so painful is that the world should contain millions more fascinating people like Zygie, but the Holocaust crushed that possibility.

I'm sorry I had to leave Detroit before a Jewish/African-American conference got under way there. But this report in the Detroit Free Press suggests to me that these kinds of gatherings should be happening around the country. Who's willing to put one together where you live?