I know you don't have a lot of time to read this today because, no doubt, you'll soon be off somewhere celebrating the 125th anniversary of the birth on this date in 1886 of Paul Tillich (pictured here). 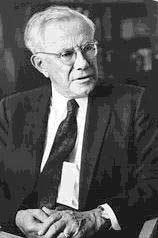 More than a year ago I wrote this Presbyterian Outlook column expressing my surprise that some members of a pastor search committee on which I served had never heard of this 20th Century giant in the world of theology.

I didn't expect them to know his thinking in detail, but I was shocked that several had no clue that any Paul Tillich had ever existed.

Tillich, whose opposition to Hitler led me to leave his native Germany in 1933 and head to the U.S. (where he taught theology at Union Theological Seminary in New York), was a fresh thinker. He's perhaps best known for describing God as the "ground of all being."

I mention Tillich today not because I think he's the most interesting or important theologian in the world but because in each religious tradition, clergy are influenced by particular minds. And it can help to know how your religious leader has formed his or her views about theology and its implications based on the theologians of that tradition.

A preacher who is marinated in Tillich or Karl Barth is going to be much different than one whose primary influence is John Nelson Darby.

GOP presidential hopeful Herman Cain now says Mitt Romney's Mormon religion will prevent him from winning. Well, unlike Cain's recent nonsense about how American communities should be free to bar the construction of mosques, in the case of Romney, Cain is simply reporting probable reality and not making bigoted observations. The bigotry comes from all the people who think Momonism is a cult or demonic faith that will cause Romney, if elected, to do strange things.