As you may or (more likely) may not know, the Dalai Lama (pictured here in a U.S. government photo with President Obama) has been in the U.S. in recent days. In fact, he met with Obama on Saturday, and even before the meeting the Chinese government issued a statement criticizing the gathering. 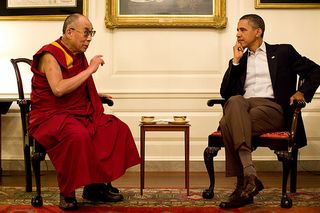 When I wrote parenthetically above that it's more likely you may not know, I was simply reflecting the reality of widespread religious ignorance in the U.S.

Indeed, a religious knowledge survey released last fall by the Pew Forum on Religion & Public Life indicated that 47 percent of Americans had no idea what the Dalai Lama's religion is.

This willful ignorance strikes me as another reflection of our degraded culture, in which almost everybody knows the names of the actors and actresses in the latest Harry Potter movie but many people can't name their member of Congress or say whether the pope is Catholic or Hindu.

I've previously recommended a book to help with this ridiculous disease. It's by Stephen Prothero and is called Religious Literacy: What Every American Needs to Know -- And Doesn't.

If you guessed that the Dalai Lama is a Tibetan Baptist or a Tuesday Night Pastafarian, read the book. How are you going to avoid prejudice and bigotry about the religions other people follow if you don't know squat about those faiths and their leaders?

I've just begun reading journalist Janet Reitman's newly released book, Inside Scientology: The Story of America's Most Secretive Religion. And I hope to do a review of it here on the blog in the next week or three. But before I get to that, I wanted you to have a chance to read Reitman's essay on the question of whether Scientology is really a religion. Good question.

Friending: Real Relationships in a Virtual World, by Lynne M. Baab. The new social networking tools -- Facebook, Twitter, My Space and the rest -- have, by their very existence, raised profound questions about what friendship means. For instance, am I really and truly friends with my nearly 700 Facebook friends? Of course not. In fact, I hardly know some of those folks. But if that's the case, what does friendship really mean in our virtual age? That's the question Lynne Baab comes at from various directions, including notions about being friends with God. Maybe it's because I've thought a lot about this subject in the last year -- partly as a result of a sermon series by my pastor on community in the Internet age -- that I didn't find this book full of insights I hadn't considered before. But if you've given precious little thought to what friendship and community means today, this book can help you ponder all that in a thoughtful and systematic way. The study questions throughout the book can aid considerably in that process. The author, by the way, teaches pastoral theology in New Zealand. Knowing that background, I was disappointed that she repeated the old misinformation that the Apostle Paul converted to Christianity. No. There was no Christian religion yet when Paul lived, only the Jesus Movement within Judaism. Paul always thought of himself as a Torah-observant Jew, but one who believed that the Jewish Messiah had come in Jesus of Nazareth. Describing Paul as "becoming a Christian," as Baab does, has profound implications for how we understand Paul and, in the end, how those of us who are Christian relate to Judaism.