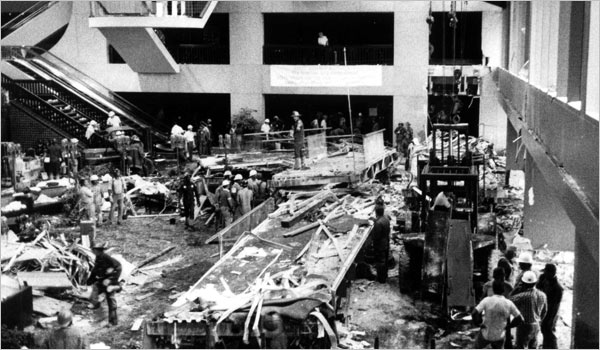 As many of you know, Kansas City is marking the sad 30th anniversary of the collapse of the skywalks at the Hyatt Regency Hotel here, a disaster that resulted in the death of 114 people and the injury of another 200.

When the early evening event occurred on July 17, 1981, I was with my Kansas City Star softball team at Northeast Athletic Field. After the game we retired to a nearby watering hole. A TV in the corner broke in with the Hyatt news. Our managing editor was with us and quickly assigned people to go cover this or that aspect of the story.

I was already a columnist on the editorial page and, thus, did not work for the managing editor. But he asked if I'd think about coming in the next morning to produce the lead commentary piece on a special section that The Star would produce for that Sunday.

Which is what I did.

But what I want to talk about today is not so much those still-clear memories of that catastrophe or the Pulitzer our staff won for our coverage.

Rather, I want to point out that no one is immune from disasters -- even clergy.

The most severely injured of the Hyatt survivors turned out to be Sally Firestone, who grew up just a couple of blocks down the street from my family in Woodstock, Ill. Sally, two years younger than me, was in my sister Mary's class. (Sally is mentioned in the piece to which I've linked you above.)

Sally's father was pastor of the Methodist Church next to which the Firestones lived.

I was both surprised and delighted to learn -- well before the Hyatt fell -- that Sally now also was living in Kansas City. Indeed, she stopped by The Star one day just to say hello.

But catastrophe treated Sally and her parents just the same as anyone else and did not change the rules just because her father was in ministry.

Indeed, I know clergy who:

* Have children with disabilities

* Have been estranged from their children

* Have seen their marriage collapse

* Have lost children in car wrecks.

Imagining that doing God's work somehow is protection against the bad stuff life can throw at people is delusional.

And those of us in the congregations of clergy would do well to remember that and to offer them the same kind of love and compassion we seek when evil finds us.

A spokesman for the Wisconsin Evangelical Lutheran Synod (WELS), the denomination Rep. Michele Bachmann left just before announcing a run for president, acknowledges that his church considers the papacy to be the anti-Christ. As The Washington Post reports in the story to which I've just linked you, "The denomination says on its Web site: “We identify the anti-Christ as the papacy. This is an historical judgment based on Scripture.’’ Well, this kind of "historical judgment" goes back to Martin Luther, father of the Protestant Reformation. But you also find it in John Calvin, theological father of my denomination, the Presbyterian Church (USA). The difference is that we Presbyterians recognized that judgment as simple theological bigotry and have long ago rejected Calvin on this point, as have several other Lutheran denominations. Luther, by the way, in 1543 published On the Jews and Their Lies in which he proposed forbidding rabbis to teach, destroying Jewish homes, schools and synagogues, and confiscating Jewish prayer books.Some of his virulent anti-Jewish attitudes were used by the Nazis as excuses for their efforts to murder Jews in the Holocaust. But Lutherans of all stripe today have rejected Luther's teaching about this.