As most of us are aware, the Bible often is used in arguments about public policy as well as individual behavior. 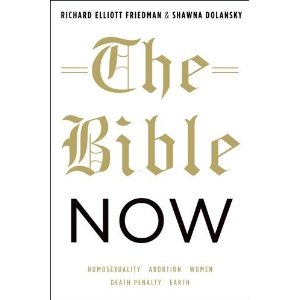 Indeed, in my experience, the Bible gets dragged into these discussions by people who are absolutely certain about what it says even though they often know little about the context of the verse (usually no more than one or two verses) they are quoting.

It's this debating from ignorance that a new book, The Bible Now, by Richard Elliott Friedman and Shawna Dolansky, should help.

Looking only at the Hebrew Scriptures, or Jewish Bible, the authors unpack what scripture says about homosexuality, abortion, women, the death penalty and the Earth (in terms of ecology).

This is serious, good scholarship.

It is not polemical writing to score political points. Rather, it is good exegesis. Which is to say, it considers the time and context in which the texts were written. It considers the meaning of the original language. It ponders how people at the time might have understood what was written. It draws distinctions between words that are understood as law, as prose or as poetry, and it seeks to help the reader understand the level of authority and meaning such writings have.

If Bible-based disagreements about homosexuality or abortion, for instance, used the careful analysis found in this book -- the sort of analysis that seeks to understand how the Bible applies today, if at all -- the whole world would be much better off.

The authors are clear that they are not including New Testament passages in their work. There are some good books that include such texts on various subjects, but it would be wonderful to have them done in one book in this kind of thematic approach. Nonetheless, because the Hebrew Scriptures are nomative and authoritative for both Jews and Christians, this is an excellent start.

(For my own essay on what the Bible says about homosexuality, look under the "Check this out" headline on the right side of this page. I may now revise and update that essay using some insights from this new book.)

AND FORGIVE US OUR DEBTS?

Various representatives of faith communities are weighing in on the debt ceiling crisis. For what some Catholics had to say, click here. And if you want to listen to a press conference about all of this yesterday from clergy representing some 4,000 clergy around the country, click here. Obviously not all clergy agree on what to say about this or even whether to say it, but I'm glad some are speaking out on behalf of the values their communities represent.