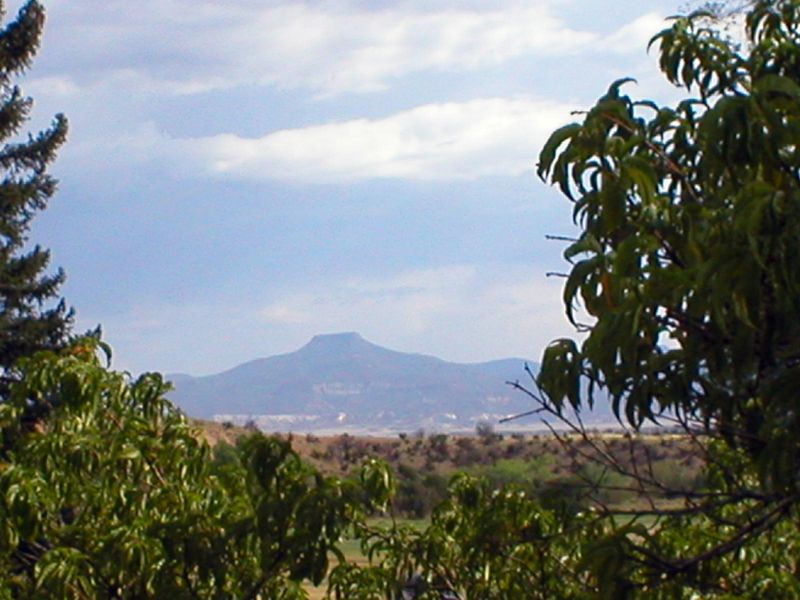 ABIQUIU, N.M. -- The red rock hills around us -- some only yards away -- were HD clear most of each day last week here at Ghost Ranch, where I was teaching a writing class.

But in the evenings, smoke from the Las Conchas fire would drift toward us and sometimes obliterate the famous flat-topped hill Pedernal, which God once told artist George O'Keeffe she could have if she painted it a hundred times. (That's Pedernal in the photo here today.)

It drifted toward and over us and our throats knew we were ingesting some of the geography, sucking into our very being some of the atoms and molecules that, until recently, had made up trees and shrumbs and grasses.

In an odd sort of way, we were becoming the charred land near us.

Even on the days when the smoke seemed to be way off from the ranch, my eyes were reddened, and I knew they were reacting to what I could not see.

The writing class I taught I called "Restless Hearts: Writing Our Way Toward Home." And it was perhaps fitting that the land that was our home for the week came sliding through the air toward us and into us and around us as smoke.

The great religions teach stewardship of -- care for -- the land, the whole environment. The lessons seem much clearer when you realize that some parts of the landscape we are to protect now reside within us as ingested smoke.

Do you watch TV shows about housewives? If so, would you watch "Real Housewives of the Bible?" That show is to be released soon on DVD, and it features the lives of a dozen or so biblical women. I'm a little fearful of how it will be presented, but maybe it will be worthwhile. Someone out there watch it and tell me.

White Lama: The Life of Tantric Yogi Theos Bernard, Tibet's Lost Emissary to the New World, by Douglas Veenhof. This is a marvelously well-reported account of a man of whom most Americans -- even those who pursue yoga, Buddhism, Hinduism or any related Eastern spiritual practice -- have never heard. And yet without Theos Bernard it's difficult to imagine that yoga would be anywhere near as popular as it is today in North America. Bernard, who simply disappeared in 1947 in the Himalayas, 10 years after being the third American ever allowed into Tibet, was an early practitioner and teacher of Hatha Yoga, Tantra and the philosophy of Tibetan Buddhism. As a boy who grew up Episcopalian in Tombstone, Ariz., it was wildly unlikely that Bernard would become an expert in all of this and -- more to the point -- spread the word about it all to the United States. But his wanderlust father and a half-brother led him to yoga and Eastern religion, and it felt like home to Theos. Veenhof is a careful writer who fills in lots of missing information about Bernard through meticulous research. Even for folks who don't care much about yoga or Buddhism or Eastern spiritual practices, this is a good and engaging story.