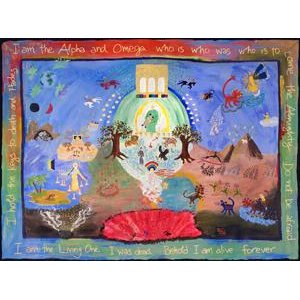 DETROIT -- For centuries, the last book in the New Testament, Revelation, has been what one theologian has called "a happy hunting ground for all sorts of bizarre and dangerous interpretations." 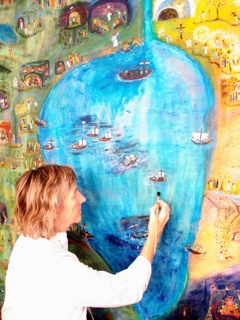 For an example, see the (still) late David Koresh, whose theological center as he led the doomed Branch Davidians near Waco, Texas, was the mysterious book of Revelation.

It helps to know that even the great reformer John Calvin was baffled by the book. So he never wrote a commentary on it. It also helps to know that Revelation is the account of a vision recounted by its author, John (there's debate about who John was). And a vision written down does not equal minutes from a meeting of the zoning board.

The problem has been that all sorts of people have read Revelation as primarily a book of prophecy about what would happen in the 19th, make that 20th, no, make that 21st Century. The prophecies keep getting pushed back (see Harold Camping) because, well, the date-setters for the end of the world are never right, even though they claim to be garnering nothing but truth from Revelation.

All of that is prologue to my introducing you today to Debby Topliff, whom I heard speak here recently to a gathering of religion journalists. Topliff makes visual translations of parts of the Bible, including Revelation. What does "visual translations" mean? Big art. She makes large-scale paintings of the characters in such books as Revelation, Acts and Mark. She brought with her big cloth printings of her art to show us. (The top photo shows her Revelation painting.)

I am both cautious of her straight-forward approach to Revelation but also engaged by the way in which she is able to turn the storyline (if you can call it that) into what looks like folk art. She acknowledges that she's not a trained artist and that some people think her work resembles that of a seven-year-old.

That said, I found the DVD she's put together about her Revelation work helpful just in following the book of Revelation as the story unfolds in it.

One has to read between the lines a bit to guess that she probably reads the book of Revelation in a much more literal way than I do. Her degree from Trinity Evangelical Divinity School, which has a reputation for being quite theologically conservative, in Deerfield, Ill., is a clue that such a conclusion is warranted. (For Trinity's "Statement of Faith," click here.)

Still, there is clarity in her work about the storyline itself and there is a certain charming innocense about her simple, child-like art.

So I leave it to you to decide whether to order her DVD or to follow up on her work in any other way. But one thing is clear: After all these years, Revelation has not lost its ability to attract all kinds of responses to it.

Religion News Service has done this interesting piece about whether the creedless Unitarian Universalists have much of a future. I suspect there will always be religious people at the UU end of the spectrum -- kind, loving people who love the questions but aren't much satisfied with any of the traditional answers -- though whether the UU structure itself survives is unclear.