Since 9/11, many Americans have been asking why traditional Muslims don't speak out more often and more clearly against terrorism rooted in a radical and twisted version of Islam. 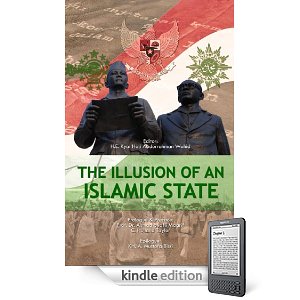 Well, in fact many have spoken out and continue to do so, though others have been silent in the face of death threats from some of the more violent radicals.

But today I want to introduce you to an effort to mobilize people described as "moderate or liberal" Muslims to stand against the kind of terrorism represented by the late Osama bin Laden and his al-Qaida folowers.

It's a group called the LibForAll Foundation and it has just released an English version of a book published two years ago in Indonesia, the country with the biggest Muslim population in the world. The book, The Illusion of an Islamic State, describes the various ways in which the violent political idealogues who claims Islam as their motivation are wrong. You can order the e-book version of this through the LibForAll Web site.

LibForAll is an American organization but was co-founded by the late and former Indonesian president, Abdurrahman “Gus Dur” Wahid.

I'm not suggesting that LibForAll has all the answers or that it cannot be criticized for this or that approach. But I wanted you to have a chance to look it over as one example of Muslims seeking to undermine the credibility of the violent extremists who get most of the press coverage.

I've often said that the only questions about religion that should be considered when evaluating a candidate for public office in the U.S. is how the person's beliefs might affect public policy and/or international relations. In the case of Rep. Michele Bachmann, the Minnesota Republican considering a race for the presidency, it would be a useful exercise to explore what her small Lutheran denomination teaches about the pope being the antichrist and about the need for Israel to control the now-Muslim-controlled Temple Mount in Jerusalem so Christ's Second Coming can happen. Beliefs have consequences, after all. (Just for the record, John Calvin, patriarch of Presbyterians, also believed the pope was the antichrist. It wasn't the only thing he got wrong.)

God Without Religion: Can It Really Be This Simple? by Andrew Farley. This means to be a helpful book, especially for people new to the Christian faith, but it is disturbing and problematic. Its tone -- besides being so informal as to be almost flippant -- is supersessionist. Supersessionism is that peculiar Christian disease that assumes -- and sometimes openly declares -- that Judaism has been made irrelevant and should go away (though since the start of the Jesus movement 2,000 years ago, Judaism has ignored that advice, despite century after century of anti-Judaism in Christian history. Look under the "Check this out" headline on the right side of this page for my essay on that subject.). Without ever quite saying exactly that, the author implies that with the coming of Jesus, God radically changed character from a mean old person who gave the Jews strict rules they couldn't keep to a nice and loving person of grace, grace, grace. Farley asks readers whether they'd like to "live under six-hundred-plus laws of the Old Testament" or, instead, choose the "beautiful simplicity of God's new way." (Americans today might well ask, "What? Only six-hundred some laws? What a deal. By contrast, we live under thousands and thousands.") Farley uses the term "religion," which he seems to want to do away with, to mean a rules-based legalism (read Judaism), though he mostly lets readers try to figure out what he means by the word religion. All that's clear is that religion is bad. This creates a kind of phony anti-religion, pro-Jesus edginess. The reality is that the debt Christianity owes to Judaism is profound. This book seems to take no notice of that at all but "because there's a new kind of priest in town, God is telling us we can't mix in the old way of the law." Reading Farley, one might assume that five minutes after Christ's resurrection the Christian church appeared in full flower with a radical rejection of its Jewish roots. That's both bad history and bad theology. In fact, it took decades -- and in some places much longer -- for what became Christianity to separate itself from Judaism decisively. (Two books to read are The Misunderstood Jew, by Amy-Jill Levine and The Reluctant Parting, by Julie Galambush.) So when Farley writes about Paul and his ministering to Christians, he ignores the reality that Paul always thought of himself as a Jew (though one who believed the Messiah had come) and that there was no Christianity yet, only a Jesus movement that would eventually become Christianity. There is much about traditional religion that is stultifying and needs to die. But it's possible to deliver that message in a way that doesn't require us to denigrate a tradition different from our own. That, however, requires the Benedictine virtue of humility, and I find that missing in this book. (You'd do better to read any recent books by Brian McLaren and/or Tony Jones to discover how to be committed to the Christian gospel in this time.)

P.S.: The nice folks at Ghost Ranch have extended registration time for my July 4-10 writing class at there. Some come to northern New Mexico and join us for, "Restless Hearts: Writing Our Way Toward Home." Look under the "Check this out" headline on the right side of this page or just go to: bit.ly/f15cOT.

ANOTHER P.S.: My latest National Catholic Reporter column, about the errors in the sex abuse scandal made by the Kansas City bishop, now is online. To read it, click here.