Terrorism, as we know, comes in many shapes and sizes. 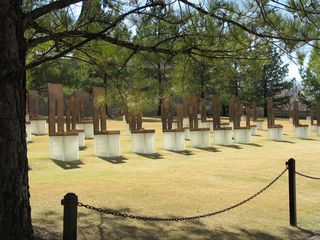 Today is a good day to remind ourselves about that for it was on this date in 1997 that Timothy McVeigh was convicted on 15 counts of murder and conspiracy in the 1995 bombing of the federal building in Oklahoma City.

If you haven't been to the memorial in Oklahoma City, I urge you to see it. It is moving and, along with the adjacent museum, instructive. (I took the photo here today at the memorial a few years ago.)

I would not classify McVeigh as primarily a religious terrorist. His brand of radicalism was more political in nature, driven as he was by outrage over the 1992 shoot-out between federal agents and survivalist Randy Weaver and the 1993 fire at the Mount Carmel home of the Branch Davidians near Waco that left 80-some people dead.

It's true that the Branch Davidian affair was mostly about religion -- and the misguided way federal authorities handled it all (see a series on this In wrote for The Kansas City Star in 1994; it's in my first book, A Gift of Meaning). But McVeigh's anger seemed to me to have much less to do with theology than with his vision of federal authority run amok.

As I say, the causes of terrorism are many. Religious radicalism, such as was demonstrated on 9/11, is only one such cause. And yet in many ways it's rigidly religious beliefs -- and the acting out of those beliefs -- that are a model for others in learning radical, terroristic behavior.

EVEN GOOD DECISIONS HAVE CONSEQUENCES

As I've said here before, the recent decision by my denomination, the Presbyterian Church (USA), to allow ordination of otherwise-qualified gays and lesbians will have some divisive consequences, though I welcome it nonetheless. Perhaps a picture of what we're in for can be seen in the Evangelical Lutheran Church in America, which made a similar decision in 2009. This story describes what that fallout has been.

A New Introduction to the Synoptic Gospels, by Roland Meynet. I introduce you to this book today not so much because I think many of you will run out and buy it and lap it up as summer beach reading but more to remind you of the kind of serious, detailed biblical scholarship that continues to be done here and around the world. To be honest, this book was not easy for me to follow, partly because it engages in a narrow academic field called "rhetorical analysis" to unpack meaning from some New Testament texts. To read a bit about what rhetorical analysis is, click here and here and here. The author of this new book teaches at the Papal Gregorian University in Rome and is a primary proponent of the rhetorical analysis method of biblical criticism. Scholars use many means of trying to understand what the Bible says -- and especially how it would have been understood by its first readers. Some of this scholarship gets absorbed by conscientious preachers and works its way into Sunday sermons. Most of my readers here (aside from those of you who are seminary teachers) probably will find this book beyond them, but at the least they can understand that it's an example of the kind of rigorous biblical scholarship being done nowadays. And it also can serve as a reminder that the term "synoptic" means "seen with the same eyes" and refers to the gospels of Matthew, Mark and Luke.