The Catholic Church is troubled in many ways, and it's not alone in that regard among religious institutions. For a decade now the church has been reeling from the priest sexual abuse scandal, and just when it looks as if church leaders have learned their lessons and are moving to set up systems that truly protect children, another sickening shoe drops. 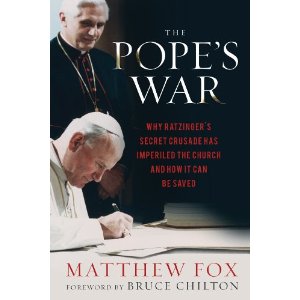 Beyond that, the church is a house divided -- over issues such as abortion, priestly celibacy and whether women should be ordained as priests.

Into the midst of all this turmoil comes former Catholic (now Episcopalian) priest Matthew Fox with his new book seeking to explore this trouble and point toward a new future. The Pope's War: Why Ratzinger's Secret Crusade Has Imperiled the Church and How It Can Be Saved, however, almost certainly will not help solve the problem.

Although it contains lots of fascinating and disturbing information, Fox -- long a thorn in the side of the Vatican -- has produced here an intemperate screed, a polemical tract that simply will cause Pope Benedict XVI (Joseph Ratzinger) and his defenders to be all the more defensive.

That's too bad. There are legitimate criticisms to be made of this pope and his predecessor, Pope John Paul II, and of the whole Vatican operation, including the way innovative theological thinkers (Fox is one) are silenced and disciplined.

But you win no arguments by yelling. And, in effect, that's what Fox has done here, starting with the provocative and unnecessary words "war" and "crusade" in the title.

In the book itself, Fox goes so far as to draw a parallel between Pope Benedict and the deranged young men who murdered students at Columbine High School in Colorado. Beyond that he uses the term "schizophrenic" to describe a change in Ratzinger's thinking and he employs statements so sweeping that they lose all meaning, such as "the Catholic Church has lost most of its credibility" and "Ratzinger killed theologians and theology itself." Whew.

Fox, who has worthwhile concerns to raise, injures his case by doing such things as anonymously quoting a priest this way: "The first thing you have to know about Cardinal Ratzinger is that he is not a Christian." Allowing the priest to hide unnamed while saying such a judgmental and strange thing is simply irresponsible.

Beyond that, you don't win arguments with theological traditionalists by relying on the often-provocative conclusions of the Jesus Seminar, that collection of Bible scholars, many of whose members seem much more interested in talking about what they don't believe than in what they do. But Fox relies on what he calls the "well-regarded Jesus Seminar" to indicate that Jesus never said some of the words attributed to him in the Bible. It would have been helpful to back up such an assertion with quotes from authorities more in the mainstream.

As I say, Fox's approach is regrettable not because he has no truth to tell but because he injures that truth by seeming to scream it the way a 10-year-old, in a fit of emotion, might yell "I hate you" to his mother.

There is much about the Vatican and the Catholic hierarchy that could benefit from some rigorous analysis by people who love the church and are distressed by some of what is going on in it today. That kind of introspection could help the church and focus it more on the wonderful work it often does.

But this is not the book to rely on for that.

TAX MONEY TO SUPPORT A RELIGION?

Once again the church-state barrier is being battered. This time it's by efforts to put public money into a Christian-based attraction in Kentucky that is about Noah's Ark, and attempts to prove the story should be taken literally. The New York Times editorial to which I've linked you gets it right.