But first: Here's a link to the column I wrote for today's Kansas City Star on the death of Osama bin Laden.

The great work of my friend J. Philip Newell, a Celtic spirituality expert, is being featured all this week by ReadTheSpirit.com, the excellent site overseen by David Crumm, former religion writer for The Detroit Free Press. 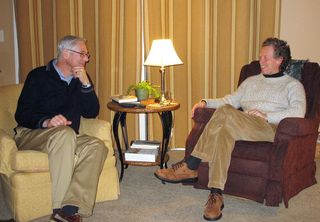 As I write this I haven't yet seen what David and his staff are going to do with the "Open my eyes. . ." theme that will highlight Philip's work, but I'm sure it will be well worth your time to drop in each day this week to check it out. So do.

Philip and I often teach at the same time at Ghost Ranch, the national Presbyterian conference center in northern New Mexico, although we'll just miss each other this year. I'll be there July 4-10 teaching a class I'm calling "Restless Hearts: Writing Our Way Toward Home." Consider joining us in that beautiful high desert spot about an hour north of Santa Fe.

Philip was in Kansas City this past January to lecture at Nazarene Theological Seminary, and while he was here I did this blog entry about a new book he's written, Praying with the Earth. In that entry, I posted an audio clip of us discussing themes from the book. Have a look and listen, and I think you'll get a good sense of the depth and insight of this man. (The photo here today shows Philip and me talking one evening at my home.)

There are so many shallow spiritual teachers and guides out there that I feel good when I can point you to someone who is deep and insightful, as Philip is. In addition to reading ReadTheSpirit this week, you also can surf around on Philip's own Web site, to which I've linked you in the first paragraph above.

ONE ROCK STAR EVENT AFTER ANOTHER

Somehow it doesn't surprise me that when People Magazine covered the weekend beatification of the late Pope John Paul II, its coverage referred to the royal wedding. Must everything be seen in pop culture terms? Apparently.

Clouds of Witnesses: Christian Voices from Africa and Asia, by Mark A. Noll and Carolyn Nystrom. This is an important and well-done follow-up to Noll's 2009 book, The New Shape of World Christianity, which itself was a perhaps unintentional extension and explication of Philip Jenkin's 2007 book, The Next Christendom: The Coming of Global Christianity. The Christian landscape has change dramatically. The center of Christianity's gravity has shifted from Europe and North America to the Southern Hemisphere and Asia. The description of how that has happened and what it means is covered in the 2009 and 2007 books I just mentioned -- and well worth reading. This particular book gets more personal. That is, it tells stories of remarkable individual Christians who have been part of the transition. So we meet the first Anglical African martyr as well as active reformers and leaders from India, Korea and China. As the authors readily acknowledge, there's an evangelical tilt to the people selected to be profiled here, but it's a good start, and provides an inspiring picture of the heroes and heroines whose lives have helped to stoke the Christian fires that have been burning across Africa and Asia in recent decades. This is vital history well told.

P.S.: President Obama has declared this Thursday, May 5, as National Day of Prayer. Is this what presidents should be doing? If so, why? If not, why not? For the official declaration, click on this link for a pdf: Download 2011prayer.prc.rel