What do we make of people who claim God has spoken to them and told them to do this or that? Well, in this culture we often try to get them mental health assistance. 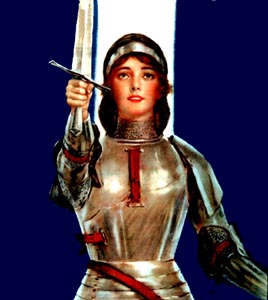 But in previous times that sometimes was far from the case. And today is a good day to think about religious visions and messages from God because it was on this date in 1429 that Joan of Arc (depicted here) -- convinced that God had ordered her to help Charles, the French dauphin, gain the throne -- led a small force of troops that brought relief to the city of Orleans, which had been besieged by the English since the previous October.

You can read a bit about that day in history here, and you can read a brief biography of Joan here. But if you really want to get a flavor of Joan and her life, I recommend none other than Mark Twain's remarkable book about her, called Personal Recollections of Joan of Arc. It's a wonderful read.

But outside of the mystic traditions of the great religions, it's pretty rare nowadays to find religious leaders suggesting to their people that they listen to an audible voice coming directly to their ears from God. And when we hear about such things, it's often a deranged person who's just been arrested for murdering someone he or she said God suggested be murdered.

I'm certainly not proposing to limit the ways in which God can speak to us. But my guess is that today Joan of Arc would have a much tougher time convincing anyone in France -- much less a leader there -- to buy into the notion that God had ordered her to lead troops into battle. And, no, I'm not going to make any French surrender jokes here today. You can tell those yourself, if you want.

GIVE THEM A WIDE BIRTH

Speaking of people with odd thoughts, I want to say something about the "birthers" in view of this week's release of a quite famous person's long-form birth certificate. Well, what I really want to do is to link you to this story, which quotes prominent Southern Baptist leader Richard Land, whom I've met and whom I like (though I don't always agree with him), as saying that the people insisting President Obama wasn't born in the U.S. are "irrational and a little imbalanced." I couldn't have said it better myself. And did you ever notice that birther rhymes with earther -- as in Flat Earther? Hmmm.