Over the years, I have argued that religious communities add wonderful richness to the fabric of our society. In fact, it's hard to imagine how impoverished our communities would be if religion and its gathering places simply disappeared. 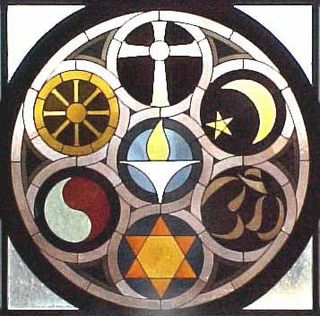 I thought about this again the other evening as I was listening to a fabulous musical performance at Visitation Catholic Church of Kansas City. So what the church calls Venue Visitation, musical events that take place in the church's sanctuary, becomes my first example here of how faith communities offer a wealth of resources to their communities. By the way, the 2011-12 concert series for Venue Visitation has just been announced, and you can read about that on the Web site to which I've linked you here.

Some quick other examples (out of hundreds in the KC metro area it would be possible to mention):

* I was at Westport Presbyterian Church the other day for a meeting of a committee that is organizing an event to commemorate the 10th anniversary of the 9/11 terrorist attacks. The driving group behind the event is the Westport Center for the Arts, which makes its home at Westport Pres. Take a look at everything the arts center offers the community. The church has provided it a welcome home. The 9/11 event, by the way, will be at 7 p.m. on Sunday, Sept. 11, at:

* Community Christian Church, 4601 Main St. This vibrant congregation often opens its doors for community events from concerts to lectures. Indeed, this Friday evening at Community I'll be one of the speakers at the church's annual Good Friday presentation of Haydn's "The Seven Last Words of Christ." (For details, scroll down in the church newsletter to which I've linked you.)

* Last week I was at the Jewish Community Center in Overland Park, Kan., to help judge the annual White Rose Essay Contest sponsored by the Midwest Center for Holocaust Education. The JCC is a phenomenal place that offers the community many educational opportunities as well as plays and lectures, in addition to many events and activities aimed primarily at the Jewish Community.

* A week ago Sunday at the church I call home, Second Presbyterian, I attended a UMKC Conservatory of Music piano recital by Tate Addis, our church organist. Our congregation, too, often opens its doors to such events in addition to sending our members out into the community to do various kinds of ministry -- something also true of every faith community I've mentioned here today.

* Finally, one afternoon last week I attended a meeting at St. Anne's Episcopal Church in Lee's Summit, Mo., a Kansas City suburb. It was a Habitat for Humanity group representing Christians, Jews and Muslims that is planning to build its third "House that Abraham Builds," starting this fall. I suppose we could have met anywhere, but by hosting the committee, St. Anne's was telling the broader community that it is committed to enriching the social fabric. By the way, if you want to volunteer to help with the next "House that Abraham Builds," here's a pdf that will tell you what you need to know: Download HOA 2011 Flyer.

So when people -- especially the more aggressive new atheists -- suggest that faith communities are simply navel-gazing collections of delusional people interested only in their exclusive truth, I hope you will respond by pointing out the many ways faith groups make our communities more livable.

OF POPES AND WEDDINGS AND WALKS

Now there's speculation over which event will draw more media and public attention -- the April 29 Royal wedding in Britain or the May 1 beatification of Pope John Paul II in Rome. Oh, please. What difference does it make? Besides, I'm not going to either. I'll be in KC to do the annual AIDSWalk to benefit the AIDS Service Foundation. To contribute to this great cause, click here.

Christians & Jews Faith to Faith:Tragic History, Promising Present, Fragile Future, by Rabbi James Rudin. The author is perhaps America's best-known advocate of improved Jewish-Christian relations. He's a wise man with much worthwhile to say, and I've been privileged to meet him a few times, hear him speak and gain from the experience. Indeed, he once was on the rabbinical staff of Temple B'Nai Jehudah of Kansas City. So even before I opened this book I knew it would be worthwhile. And it is. Indeed, very worthwhile and full of excellent insight, including specific ideas for ways Jews and Christians and get along better than they do now. All of that said, the book is not without its puzzlements. On the very first page, for instance, Rudin claims that the first followers of Jesus (presumably including the Apostle Paul, though that is unstated) believed that Jesus was the "replacement of Judaism." But the idea that the earliest members of the Jesus Movement were supersessionists is not sustainable. (Supersessionism -- the idea that Judaism has become irrelevant, replaced by Christianity -- came soon enough, but not immediately.) Indeed, much recent scholarship, especially about Paul, shows that those earliest followers always thought of themselves as Jews -- and they felt they belonged within the Judaism (really, the Judaisms) of the first century. That certainly was true of Paul, who believed himself to be a Jew, but simply among those Jews who was convinced that the Jewish Messiah had come in Jesus. Another smaller puzzlement is Rudin's statement that the life and teachings of Jesus "are not mentioned in any other existing literature of that era. . ." Apparently ignoring mentions of Jesus by the Jewish historian Josephus, Rudin attributes this no-other-literature claim to New Testament scholar Amy-Jill Levine. But my reading of the matter is that Levine says no such thing on the two pages of a book that Rudin cites. On the whole, however, those seem like nitpicks when compared with the excellent material Rudin offers elsewhere in the book, including the foundational insight that "Judaism stands alone without requiring Christianity's existence, but Christianity cannot stand without affirming and understanding its Jewish roots." Rudin also speaks about the uniqueness of the Holocaust in ways that are in harmony with Alvin H. Rosenfeld, whose new book, The End of the Holocaust, I reviewed here on the blog over this past weekend. And Rudin misses no issues that have made Jewish-Christian relations difficult over the years, including the poor 2004 decision made by the national ruling body of my own denomination, the Presbyterian Church (USA) to consider withdrawing investments from some companies that do business in Israel. Whoever wants to understand the centuries of anti-Judaism preached by Christianity and how that has led to where we are today should read Rudin's book. (For my own essay on anti-Judaism in Christian history, look for a link to it under the "Check this out" headline on the right side of this page.)

P.S.: It's National Columnists Day. Have you hugged your favorite columnists yet today?