I have never quite understood how people end up dying on the anniversary of their birth. Shakespeare is an example, being born (the guess is) on April 23 and dying on April 23. 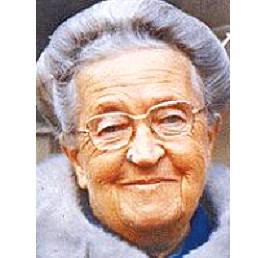 Another example allows me to remind you of the life of Corrie ten Boom (pictured here) of the Netherlands, born on today's date in 1892. She died in 1983 on her 91st birthday.

Corrie was both a victim of Nazi atrocities and a rescuer of Jews in the Holocaust. Like nearly all of the rescuers mentioned in my latest book, They Were Just People: Stories of Rescue in Poland During the Holocaust, Corrie was recognized as "Righteous Among the Nations" by Yad Vashem, Israel's Holocaust memorial authority.

One of the things that intrigues me about Corrie ten Boom is that she and her family were members of the Dutch Reformed Church and that she always cited religious motivations for standing up for the Jews. The rescuers in the book I wrote with Rabbi Jacques Cukierkorn generally did not cite religious reasons for their actions. Rather, many of them simply explained that they had known the Jews they saved before the war either through business or as neighbors. And as one member of a rescuing family said of the Jews they protected, "They were just people."

Corrie ten Boom's inspiration from the Dutch Reformed Church (since merged with other denominations to become the Protestant Church in the Netherlands) means that she came away from her religious experience with a different view than many South African members of that church did in the years that the Dutch Reformed Church there openly advocated South Africa's evil system of racial apartheid. It seems that no religious group ever has a pure history.

At any rate, if you don't know much about Corrie ten Boom, today is a good opportunity to change that and to give thanks for all the (rare) people who helped to save Jews from the Nazi death machine.

It must be extraordinarily difficult to be an American Catholic priest asked to counsel women on contraception -- knowing that the church is against it but that a new study shows 98 percent of American Catholic women use it. That's a wild disconnect between teaching and practice. And if I were a top leader in the church it would give me great pause.