I have been thinking about something President Obama said last week when he addressed the National Prayer Breakfast, and I think it's worth raising up so all of us can think about it. 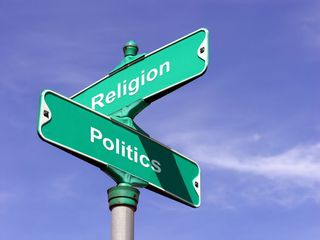 (And, yes, I'm aware of the troubling history and sponsorship of this event and suggest that if you want to know all that you read Jeff Sharlet's book The Family: The Secret Fundamentalism at the Heart of American Power.)

The president made reference to the fact that people of the same faith can have different political views and still consider each other part of the family of faith. Specifically, he talked about Sen. Tom Coburn, R-Okla.

Here's the quote from the official text:

It’s also comforting to know that people are praying for you who don’t always agree with you. Tom Coburn, for example, is here. He is not only a dear friend but also a brother in Christ. We came into the Senate at the same time. Even though we are on opposite sides of a whole bunch of issues, part of what has bound us together is a shared faith, a recognition that we pray to and serve the same God. And I keep praying that God will show him the light and he will vote with me once in a while. (Laughter.) It’s going to happen, Tom. (Laughter.) A ray of light is going to beam down. (Laughter.)

I like that idea of people of the same faith disagreeing about some things. And I especially like the idea that humor helps bridge that gap.

It's one of the things I love about the congregation to which I belong. Within our membership you will find staunch Democrats, staunch Republicans, sturdy independents and people who are, well, politically apathetic (though not many, thank goodness). And yet we understand that politics is not what holds us together. We may even have some theological disagreements but we're still family and we almost always treat each other with civility. We're not perfect, of course. If we were we wouldn't need a church. But we recognize the need for grace in our relationships with each other and with God.

Sometimes I don't understand how people within the same religion, like Obama and Coburn, can come to such different political conclusions. And yet I know that even though the faith has much to say about how politics should operate, in the end it's not about partisanship but love.

Although there's a bit of a snarky tone to this Washington Post piece, it raises some good questions and takes note of the reality that religion in America is a huge business. Should that bother people of faith? Well, yes and no. Depends on how money is used or abused and on similar questions.Just because something is big doesn't automatically make it evil. But it does make it worth watching.

Passport Through Darkness: A True Story of Danger and Second Chances, by Kimberly L. Smith. It's perhaps not unusual for people to discover within themselves a discomfort, a yearning for deeper meaning than they're experiencing, a sence of something amiss. The author and her husband both sensed that, and when they found their calling it turned their lives upside down -- or, perhaps mor accurately, right-side up. They began doing Christian mission work in Spain and Portugal and, in the process, stumbled upon the evil of human trafficking, which was the subject of this series in The Kansas City Star. Once they worked to alert authorities to a particularly egregious example of sex trafficking involving a dozen and a half captive children, they created Make Way Partners, a mission agency that works with Christian partners to stop trafficking in Sudan and elsewhere. This book describes how that work came about and how answering what they understood to be God's call to them changed their lives and the lives of many others. The writing is pedestrian but the story is compelling. And the cause of stopping modern slavery is surely one God is in the midst of through such people as Kimberly Smith.